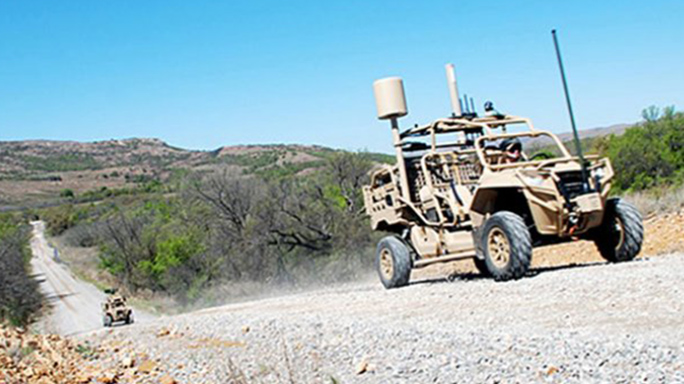 Photo by Monica K. Guthrie
The Hunter (right) and Killer vehicles drive up a road toward the experimentation area of the Maneuver Fires Integrated Experiment (MFIX), April 3, at Fort Sill.
Comment(s)

The U.S. Army recently tested a pair of new vehicles as part of its multi-domain battle concept at the 2017 Maneuver Fires Integrated Experiment in Fort Sill, Oklahoma.

Dubbed the “Hunter” and “Killer” and built for various types of terrain, these vehicles look like dune buggies, but in reality they’re capable of much more. For example, the Hunter platform would call precision fires in an automated fashion on land. For the air, soldiers could use the platform to communicate with aircraft for support. It also has maritime capability, in the sense that a forward observer could call for an attack from a ship to a target.

The Killer platform, meanwhile, would provide the ability to fight in the cyber and space domains. A soldier could theoretically request a cyber call to disrupt comms between a UAV and its operator. Soldiers could also call on space-based capabilities, the Army says.

The Hunter and Killer vehicles are modular, meaning a developer can take pieces from other systems and combine them on a single platform.

It’s still early days for these dune buggy-like vehicles, but with an end goal of giving its soldiers the ability to multitask — for example, intercepting UAVs on the battlefield — while still effectively fulfilling primary duties like gathering intelligence and relaying it back, the Army is hopeful.

“We want to see how we can automate the software to reduce the task-saturation of the Soldier,” said Scott Patton, science and technology strategist for the U.S. Army Aviation and Missile Research Development and Engineering Center (AMRDEC) battlefield operating systems suites team. “We want to reduce their workload. We want [Soldiers] just to be forward observers. If they have to get into these other domains, they can do it for a minute or two, let the software do the thinking for them, and then they go back to their domain.”

Patton said that, while the vehicles were tested by contractors at MFIX 2017, the plan is put these dune buggies in soldiers’ hands by 2018.

“What happens in one theater will be different in another theater, and the rules of engagement may be different. We want to be able to plug those ROEs in — what they can do, what they can automate — and then put the human in the loop when necessary. That’s the objective. We’re not there yet.” 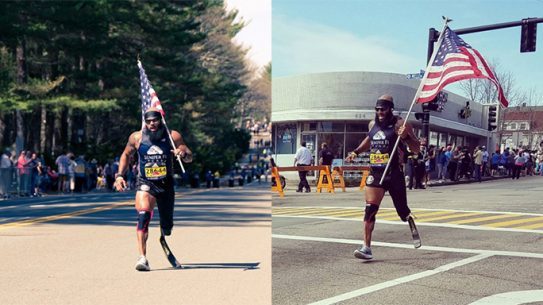 Staff Sgt. Jose Luis Sanchez, who lost his leg to an IED in Afghanistan...