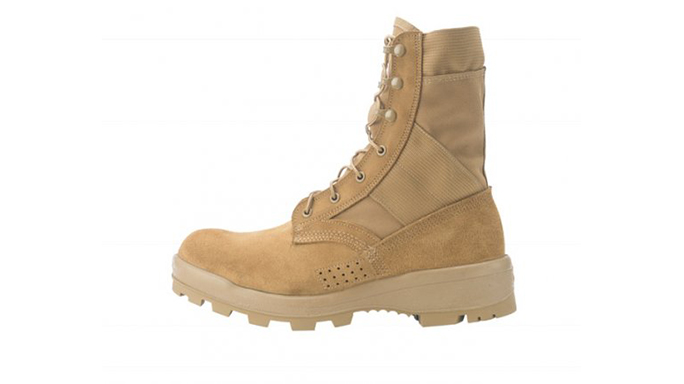 1 of 6
Photo by David Kamm
Army Jungle Combat Boot
The Army Jungle Combat Boot, under development now, features a heel with a low-height heel to prevent snags on things like vines in a jungle environment; additional drainage holes to let water out if it becomes completely soaked, speed laces so that Soldiers can don and doff the boots more quickly, a redesigned upper to make the boots less tight when they are new, an insert that helps improve water drainage, a lining that helps the boot breath better and dry faster; a ballistic fabric-like layer under a Soldier’s foot to help prevent punctures, and a foam layer between the rubber sole and the upper to provide greater shock absorbing capability. The JCB will be issued this spring and summer to two full brigade combat teams in Hawaii, part of the 25th Infantry Division, for evaluation. 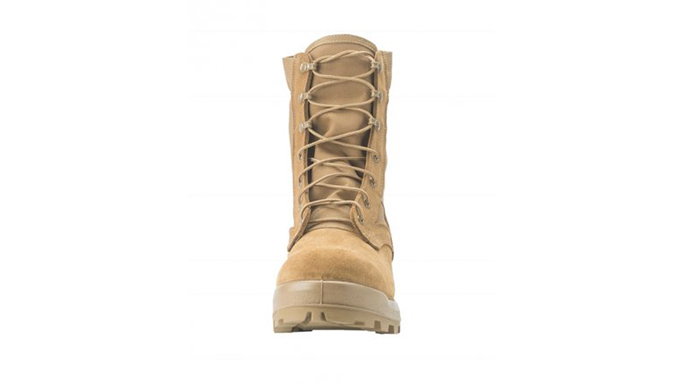 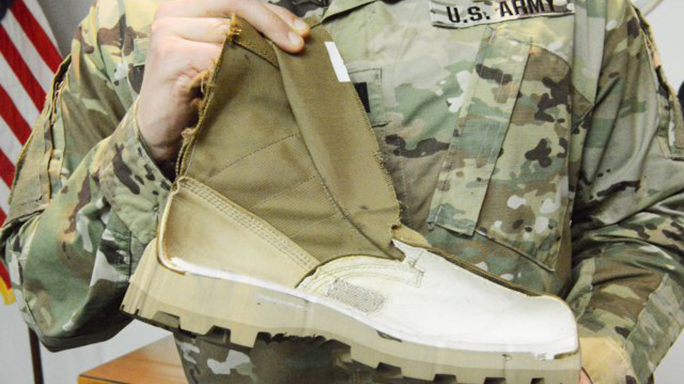 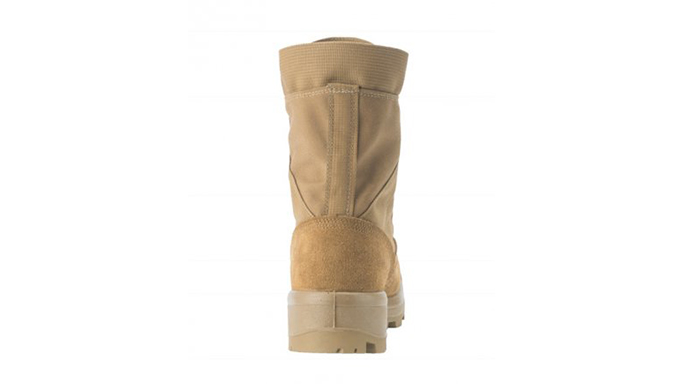 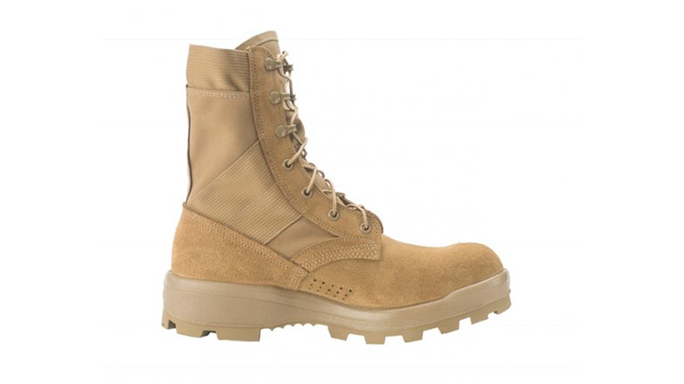 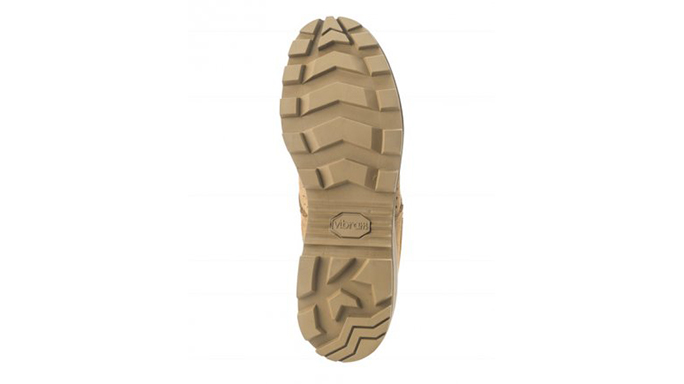 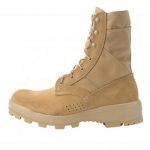 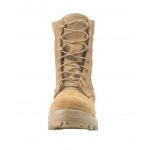 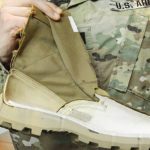 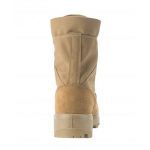 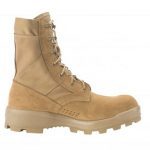 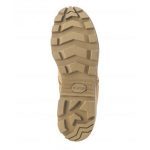 The U.S. Army is set to outfit two brigade combat teams with its new Jungle Combat Boot this month.

According to the Army, the standard issue combat boot worn by most soldiers today gets the job done in sandy dunes, hot dry weather and asphalt, but it’s sorely lacking in terms of effectiveness in hot and wet environments. Thus, last October, they decided to put out a Request for Information to industry to see what was possible, and in December, awarded contracts to Belleville Boot Company and Rocky Boots to manufacture more than 36,700 boots for two brigade combat teams with the 25th Infantry Division in Hawaii.

“This is important to the Army and important to Soldiers in a hot, high-humidity, high-moisture area,” said Lt. Col. John Bryan, product manager for Soldier Clothing and Individual Equipment with PEO Soldier. “We are responding as quickly as we possibly can, with the best available, immediate capability, to get it on Soldiers’ feet quickly and then refine and improve as we go.”

The new Jungle Combat Boot looks very similar to the current boots soldiers wear. For example, they’re the same color. They also boast features drawn from the M1966 Vietnam-era jungle boot, but combined with modern advancements. Here’s what the Army had to say about it:

The M1966 Jungle Boot, which featured a green cotton fabric upper with a black leather toe that could be polished, had a solid rubber sole that Soldiers reportedly said had no shock-absorbing capability. The new boot uses a similar tread, or “outsole,” as the M1966 “Panama style” — to shed mud and provide great traction, but the added midsole is what makes it more comfortable and shock absorbing, according to Albert Adams, who works at the Army Natick Soldier Research, Development and Engineering Center.

The outsole of the new boot is connected to the leather upper via “direct attach,” Adams said. That’s a process where a kind of liquid foam is poured between the rubber outsole and leather boot upper. “[It’s] a lot like an injection molding process,” he said.

The foam layer between the rubber sole and the upper portion of the boot not only provides greater shock absorbing capability, but he said it also keeps out microbes in hot, wet environments that in the past have been shown to eat away at the glues that held older boots together. So the new boots won’t separate at the soles, he said. “It provides a high level of durability, and it also adds cushioning.”

Also part of the new boot is a textile layer that prevents foreign items from puncturing through the sole of the boot and hurting a Soldier’s foot, Adams said. The M1966 boot accomplished that with a steel plate. The new boot has a ballistic fabric-like layer instead.

The new Jungle Combat Boot features a shorter heel than the M1966 to prevent snags on things that one would encounter in a jungle environment. Also included are drainage holes to let water out if it becomes soaked; speed laces so soldiers can quick put on and take off the boots; a redesigned upper so the boots aren’t too tight when new; an insert to improve water drainage and a lining for improved ventilation and faster drying.

The first brigade combat team will get the Jungle Combat Boot this month. The second brigade combat team gets them in June. Each soldier gets two pairs of the boots. In December, the Army will get feedback from soldiers about the new boots. Based on that feedback, they’ll develop a “final purchase description” and in fiscal 2019, a contract will be signed with multiple manufacturers to produce the final version of the Army’s Jungle Combat Boot. 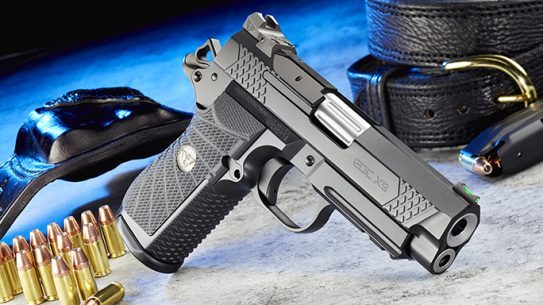 Wilson Combat's EDC X9 elevates the 1911 design to a decidedly higher level by...