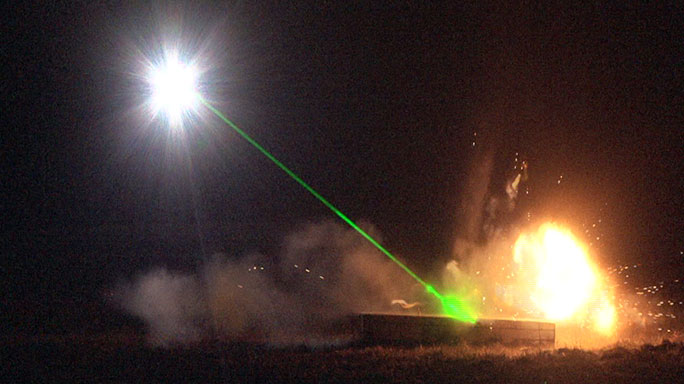 A Recovery of Airbase Denied by Ordinance prototype is shown during a testing phase in February 2015.
(Photo by Redstone Test Center)
Comment(s)

The following is a release from Carlotta Maneice, AMRDEC Public Affairs:

REDSTONE ARSENAL, Ala. (June 18, 2015) — The U.S. Army and Air Force are working together to develop mine-resistant, ambush-protected, or MRAP, vehicles with laser technology.

Before, when the military wanted to disable a bomb, highly-trained bomb disposal specialists wore body armor, protective suits or used robots to render an area safe.

With lasers, operators can negate the threat of improvised explosive devices, makeshift bombs, mines, and other unexploded explosive ordnance from a safe distance.

The AMRDEC PIF will integrate the U.S. Air Force’s laser, interrogator arm, console and other features into the Category I Cougar MRAP.

“Building the [Recovery of Airbase Denied by Ordinance, or RADBO] prototype was right in the wheelhouse of what the PIF is set up to do,” said Steven Colvin, PIF project manager. “We were able to assemble a strong team of mechanical, electrical and design engineers to solve the problems, fabricators and integrators to build the prototype and technical writers to document the installation, operation and maintenance of the system.”

“We may see hundreds to thousands of small unexploded ordnance items on a runaway or airfield but the RADBO will allow us to reduce the time it takes to get an airfield operational,” said Marshall “Doc” Dutton, Air Force explosive ordnance disposal modernization program manager of the Air Force Civil Engineer Center on Tyndall Air Force Base, Florida. “Currently, if a runway gets hit it can take days to weeks to get cleared. With the RADBO, runways can be cleared and operational at a much quicker pace.”

RADBO’s laser can detonate bombs up to 300 meters and the Army’s integrated interrogator arm and manipulator claw, which can pull 50 pounds of debris up from cracks and underneath rubble. Infrared cameras, driver vehicle enhanced capabilities and two alternators were installed to provide more than 1,100 amps of power.

“The biggest challenge for the PIF was the integration and mechanical maneuvering of adding a second alternator,” Colvin said. “The stock alternator was only 570 amps and we needed more to power the laser. After modifying the nose of the Cougar MRAP and shifting the fan and radiator forward we were able to install an additional alternator and double our power.”

Another non-combat use of the RADBO is the ability for immediate range clearance allowing fighter pilots to use the range immediately after a live-ordnance drop training exercise. Since ranges can be cleared immediately for repeated use, this capability has the potential to save lives on the battlefield.

“The PIF and the test center support have been superb,” Dutton said. “We anticipate producing 14 more RADBO after the developmental testing phase to support the AFCENT command. We look forward to partnering with the PIF in the future.”

Current testing on the RADBO includes munitions testing, hot and cold storage and electromagnetic interference. Developmental testing will conclude in July at RTC but additional tests will continue with airmen on Tyndall Air Force Base in September 2015.

The PIF is a subordinate unit of the Engineering Directorate, which plans, develops, manages, and conducts Aviation and Missile Life Cycle Management Command programs in the areas of total lifecycle systems engineering, product assurance, test, and evaluation. 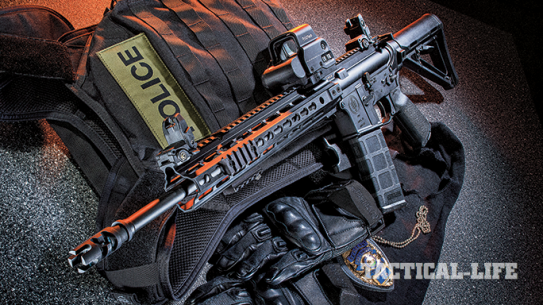 Piston-driven workhorse built to give you the edge in a firefight!