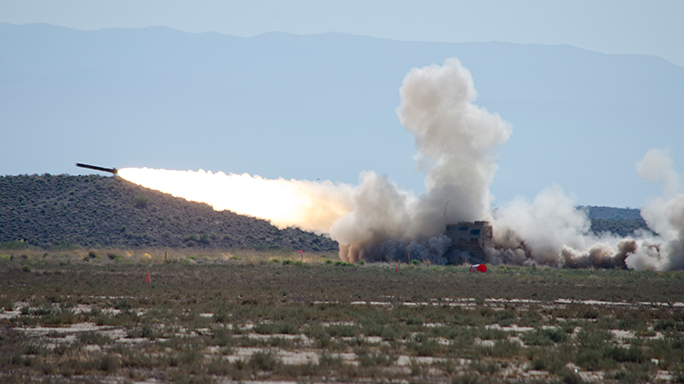 A Multiple Launch Rocket System with an improved armored cab fires a training rocket during a test. The rockets were simple training rockets and not equipped with a warhead, but still generated the same amount of stress on the launcher needed for the test mission.
(Photo by Mr. John Andrew Hamilton (ATEC))
Comment(s)

The following is a release from Mr. John Andrew Hamilton (ATEC) and the U.S. Army:

More than 100 artillery rockets were launched June 16 at White Sands Missile Range, or WSMR, to test an improved version of the M270A1 Multiple Launch Rocket System, or MLRS.

“The number to be shot is equivalent of a normal high-op tempo operation,” said Maj. Jaime Santiago, assistant product manager at the Precision Fires Rocket and Missile Systems Project Office. “The platform is supposed to prove out the capability and ensure the new upgrades have not degraded that capability.”

The M270A1 is a tracked vehicle equipped with a missile and rocket launch rack capable of firing many different kinds of artillery rockets and missiles. This makes the vehicle a highly capable weapons platform, able to perform many different artillery missions in support of many different Army and joint operations. With the original system adopted in 1983, and an improved version in 2001, the MLRS has proven itself in several different armed conflicts, including Operation Desert Shield and Storm, as well as more recently, Operation Iraqi Freedom.

As armed conflict has evolved, so have the requirements of systems like the MLRS. While it has seen several upgrades to improve its ability to put rockets and missiles on target, recent conflicts have shown a need to improve the protection the vehicle provides its crew. The Improved Armored Cab project under the Precisions Fires Rockets and Missile Systems Project office is expected to meet this goal by proving the vehicle with an enhanced armor on the cab and improving related components like the windows.

While the core system is already proven technology, the upgrades are new, and so the Army requires the vehicle to go through a rigorous series of tests to ensure the system is ready to go to the Soldiers who will use it. By taking the system to WSMR and conducting extensive firings, the test officers were able to evaluate the improvements and ensure the new cab would hold up under the stress of combat.

In order to conduct the test, a larger launch area than what is usually needed for an MLRS mission on WSMR had to be cleared. Typically, MLRS tests involve evaluating the rockets and missiles launched from the system, and WSMR has 16 launch complexes already equipped with concrete vehicle pads and protective berms for MLRS testing. This test however required the launchers to move between shots, so an area had to be cleared that would allow for these maneuvers without risking damage to the environment.

“White Sands is very unique in the size and availability of range space as well as airspace,” said Chris Gardner, an engineer technician from the Materiel Test Directorate Precision Fires Branch Warheads Office. “The troops need to be able to maneuver, and these areas are ideal for that, since they’ve got a lot of real estate they can use to maneuver in.”

In the field, Soldiers manning the MLRS system have to move after shooting, as modern artillery radar systems can be used to identify where an artillery shell or rocket came from, allowing an opposing artillery unit to return fire. As a mobile and self propelled system, the MLRS can fire and move, getting clear of possible counter-battery fire. This firing and movement can put a lot of stress on the vehicle though, and so the test was needed to ensure the improved cab would hold up under these conditions.

“It’s different in that we’re getting our hands on something before everybody else is and we’ll get to pass some of this information on,” said Staff Sgt. Tyler Roundtree, MLRS crewmember. “As opposed to our normal training, we’re really pushing the limits of fires and what these systems can really do, giving us an opportunity to really see how far we can go with this system.”

In addition to its extensive experience testing the MLRS family of weapons, WSMR also is a good operational test environment for other reasons. The widely varying temperature, rough terrain and dusty environment can put additional stress on systems undergoing testing like this, improving the realism of the test.

“White Sands offers us an opportunity to really, really stress the system,” Santiago said. “It’s a very rough environment to test, and when we can effectively get the hours or assessment we need in an environment like this, we feel very confident the system is ready to meet its wartime mission.”

WSMR conducts MLRS testing around three to 10 times a year, testing guided and unguided rockets and missiles, as well as the various launch platforms and supporting systems. These tests can range from simple reliability testing, or more complex tests focusing on new systems, and capabilities.

“The MLRS program has a long history with White Sands, we’ve been testing with them from the beginning, and we’ve continued to provide them the support they need to do these new system tests as well as launcher tests,” said Chris Gardener an engineer technician with the Materiel Test Directorate’s Precision Fires Branch, Warhead Section.

Under current Army requirements, these improvements will bring the M270A1 in line with related systems, like the High Mobility Artillery Rocket System, a lighter weight rocket system related to the MLRS, but lighter and mounted on a newer armored medium truck. By modernizing the MLRS, the system will be able to see continued use for the foreseeable future. 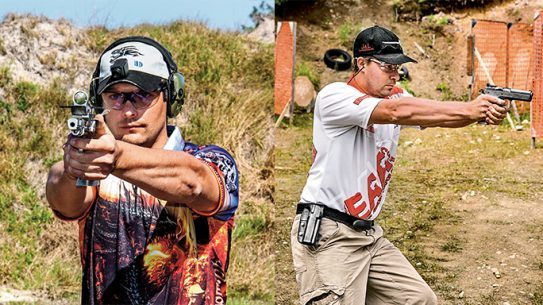 All roads lead to victory with EAA's competition-ready match kings!