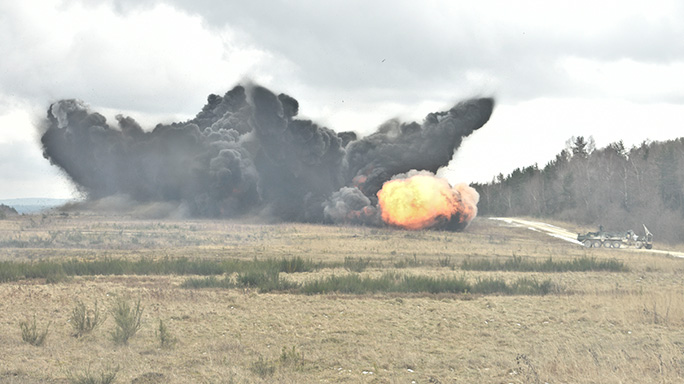 The following is a release from Sgt. William A. Tanner, 2CR public affairs print journalist:

Very rarely do Soldiers get the opportunity to see a mine clearing line charge (MICLIC) go off, but if given the chance, most of them admit that they would be front and center watching with anticipation for the boom to happen.

Troopers assigned to Alpha Troop, Regimental Engineer Squadron, 2nd Cavalry Regiment, alongside British Soldiers assigned to the 22nd Engineer Regiment, British Army, were provided with that exact opportunity, March 2-3, 2016 when the squadron detonated a MICLIC for the first time in three years at the Grafenwoehr Training Area, located near Rose Barracks, Germany.

“We are out here firing a MICLIC rocket with a live tub to certify our squad leaders for follow on missions,” said Staff Sgt. Thomas Raab, a combat engineer squad leader from 2nd platoon. “We train for this often but this is the first live fire that I have seen in three years.”

For an event like this to happen successfully, different elements and units have to come together in order to work as one. This not only includes manpower but equipment as well.

“We have our ESV (Engineer Squad Vehicle,) which is the engineer model of a Stryker and our MICLIC that runs off of a trailer,” said Raab. “The intent is to launch it off that, breach an obstacle lane ‘width wide and 100 meters long,’ roll our Strykers through, proof the lane and mark it for follow on forces to come through and assault the objective on the other side.”

Raab elaborated on the use of the device using the planned scenario for the day’s events.

“We would pull up to the mine field, stop off at a distance of about 60 meters and fire the rocket which launches the C4 explosive over the mine field,” said Raab. “Once it lays down, you detonate it and it clears about a 14 meter wide path big enough to drive a Stryker through.”

The rarity of an event like this was not lost on the Troopers participating in the makeshift scenario as distinguished visitors and unit leadership came out to watch the detonation.

“In my eight years in the military, this is the first time I will actually see this happen,” said Raab enthusiastically. “I came from a heavy unit with Bradleys and Abrams where we would do more dismounted breaching.”

Through his past experiences, Raab realized how far Army engineers have come in dealing with explosives and how technological advances in the field have made their jobs much safer.

“You have 1,750 pounds of C4 on one cord that fires at one time instead of a Soldier out there with a mine detector sweeping it, checking it and then putting a block of C4 by the mine,” said Raab. “This is a much safer way for us to do it.”

When it is all said and done, the real fun is in the detonation and having access to see something that not many others get to see, let alone participate in.

“This is a lot more fun and is the best way to do it,” said Raab. “This will probably be the largest explosion that we are going to see at one time here in Graf.” 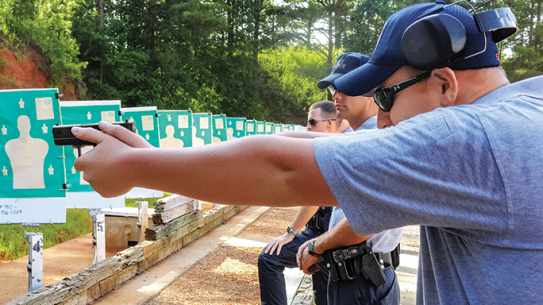 The Georgia State Patrol is the first to adopt the 9x19 Glock 43!