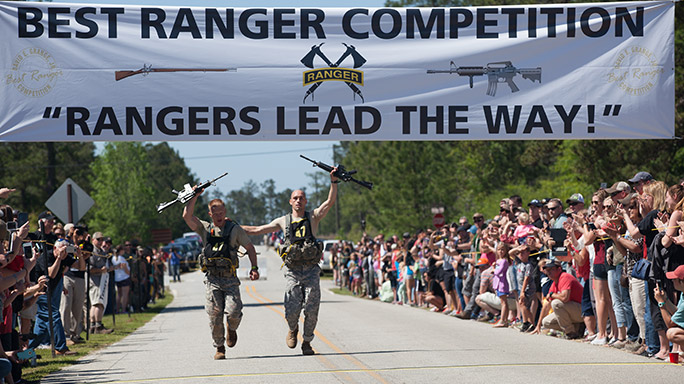 The following is a release from Staff Sgt. D. Richard Salzer:

Soldiers from the Army National Guard took first place in the grueling Lt. Gen. David E. Grange Jr. Best Ranger Competition, the first time in the competition’s 33-year history it has been won by an Army Guard team.

“It’s a big thing for the Guard and I’m humbled and honored to be the first,” Killian said. “I’m ecstatic and honored and I hope I’m an inspiration for others.”

Killian and Friedlein were recognized during an official ceremony, April 18, at Fort Benning where they hoisted high their awards to a standing ovation.

“It still really hasn’t totally sunk in yet,” said Friedlein after the ceremony. “I’m just really amazed. I can’t believe we did it after the three days of struggling and just constantly trying to chip away at first place, then taking the lead after night orienteering and losing it on the obstacle course, just fighting all the way to the end.”

Friedlein said he has never seen a competition so close, with only a 12-point difference between first and second place.

“Everything was back-to-back,” said Friedlein. “The competition this year was designed really well. They gave you no time to recover and you just had to give everything and stay focused and prepare for the next event after you finished the one you were just on.”

The competition pace also meant no dwelling on any possible missteps along the way.

“If you made any mistakes, just let them go and say ‘Alright it’s done, can’t go change it,” said Friedlein, adding it meant doing better on the next event.

Going into the first night’s ruck march, Friedlein said he and Killian knew they had to push hard.

“We already knew we were kinda behind in points, not exactly where we wanted to be,” he said.

“When I say he pushed me, he physically pushed me on a lot of the uphills just to get me going faster so we could close the gap.”

By the end of the first day more than half of the 50 teams that began were cut. Medical issues saw two teams drop out and competition officials dropped the teams with the 25 lowest scores.

As the competition wore on, Killian and Friedlein continued to bounce around the top three spots, a result of mistakes on individual events that prevented them from definitively jumping ahead.

“The key thing is making the least amount of mistakes as possible,” Killian said. “We just left it, went on to the next one and said ‘we’re just going to have to push harder now’ and make up for any shortcomings that we had.”

Both Killian and Friedlein continued to push each other until the climactic end. Going into the final event — a buddy run — Friedlein said the pair knew they had a three-point deficit to make up. Killian kept him focused on the way ahead.

“I wasn’t allowed to look back to see where the other guys were. He just kept lying to me, telling me they were right there,” he said. “It wasn’t until [the final turn] that he put his hand on my head and said ‘Hey man, we’re about to win the pistols,’ and I was thinking how are you saying that if they’re right behind us?”

It was a moment of supreme accomplishment for Friedlein.

“The whole three days, trying to keep up with Capt. Killian was a struggle,” he said.

The struggle paid off and the two were presented with first-place honors. Patrick Murphy, the acting secretary of the Army, presented the awards to Killian and Friedlein during a ceremony Monday.

“[The competitors] are an inspiration to all of us in our military, all one million Army Soldiers,” Murphy said. “The fact that we had a team from the [Army] National Guard — Colorado and Pennsylvania — team up and win that competition is pretty special.”

After the ceremony, Killian said he’ll be back to compete again, adding he promised a former teammate, who is now going through the Special Forces qualification course, that the two would compete as a team again.

“There hasn’t been a Green Beret team to win it in a while, so I have a different reason to come back,” Killian said.

Friedlein had a more immediate goal.

“I’m going to eat a big burger and probably go home and take a nap,” he said. 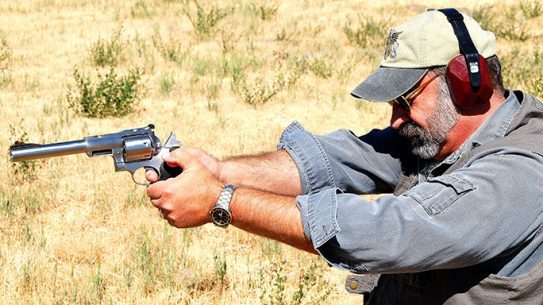 High-powered pistols and revolvers ready to strike back with proven stopping power.