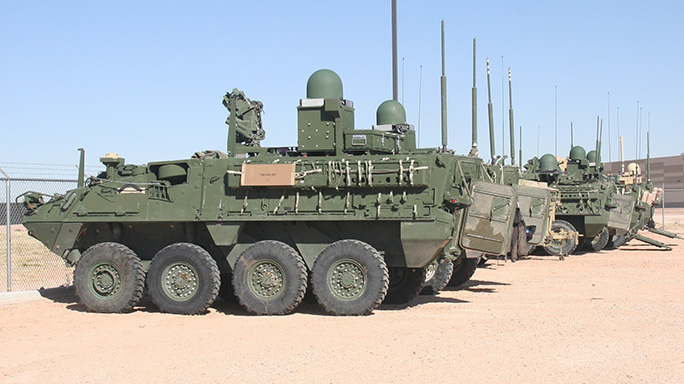 The Army's new Rapid Vehicle Provisioning System (RVPS) reduces the time it takes to provision an entire brigade's worth of networked vehicles from six weeks to less than five days. The Army conducted a demonstration of RVPS in late February 2016 at Fort Bliss, Texas, where it installed and configured all of the 2nd Brigade Combat Team, 1st Armored Division's Warfighter Information Network-Tactical (WIN-T) Increment 2 equipped vehicles, including these Strykers, in preparation for the unit's support at Network Integration Evaluation 16.2 in May.
(Photo by Amy Walker, PEO C3T Public Affairs)
Comment(s)

The following is a release from Amy Walker, PEO C3T Public Affairs:

The system acts like a filling station, connecting the vehicles to a single server, which can provision, load, configure and install needed software simultaneously, versus conducting these tasks as it did in the past — one vehicle at a time.

WIN-T is the Army’s tactical communications network backbone, the transport mechanism that enables mission command, communications and situational awareness in both stationary command posts and on-the-move in combat vehicles, from any location or in any terrain. RVPS will be virtualized onto the existing hardware of the WIN-T-equipped vehicles, so vehicle size, weight and power requirements remain unaltered.

The Army conducted a demonstration of RVPS in late February at Fort Bliss, Texas, where it installed and configured all of the 2nd Brigade Combat Team, 1st Armored Division’s WIN-T Increment 2 equipped vehicles in preparation for the unit’s support at Network Integration Evaluation (NIE) 16.2 in May. The demonstration was a risk reduction exercise to prepare for a Soldier supported RVPS demonstration at Army Warfighter Assessment 17.1 this fall. On the current timeline the Army plans to field the first iteration of RVPS in fiscal year 2017.

Currently, in networked vehicles software must be manually loaded and then each vehicle tested to verify that hardware and software are fully operational. Prior to RVPS, units could only manually and laboriously test a small percentage of a vehicle’s WIN-T Increment 2 software and hardware, due to time it would take to test every item and configuration. RVPS automates this testing and can quickly and easily test 100 percent of these capabilities. Also, since RVPS performed the original configurations, it knows the root of any problems that may arise, so those can be resolved immediately before a unit heads into battle with a potential undetected issue.

In addition to the initial provisioning and testing, the Army must also install quarterly software updates to the WIN-T Increment 2 vehicle configurations, which totaled for the year could take over four months for each brigade. RVPS will install these critical updates in mere days.

“Unit readiness is a high priority especially in today’s leaner Army,” said Lt. Col. Michael Williams, product manager of WIN-T Increment 2. “By dramatically cutting these install times, RVPS will improve unit readiness and speed of maneuver, so units can move out when the mission demands.”

Adding to the gained time efficiency is RSVP’s important role in cyber defense for the tactical network.

RVPS can be either wired or operate through a developing Over The Air (OTA) capability, which like all of the RVPS capabilities, will be continually enhanced over time. OTA eliminates the need for units to have to wait for their next quarterly release to push out software patches. RVPS will be able to push them out over the air to the entire brigade within a day.

“When cyber breaches or vulnerabilities occur, patches often need to be uploaded within 24 hours,” said Kevin Paradine, RVPS project lead for PdM WIN-T Increment 2. “RVPS will enable us to perform required updates on an almost immediate basis by distributing and installing the required changes in an automated fashion.”

RVPS also enhances maintenance and troubleshooting by adding configuration management drift detection. Now, from a central command post location wither at a WIN-T Increment 2 Tactical Communications Node or Network Operations Service Center, the unit will be able to look at every switch, router, server and every configuration in entire brigade and be able to conduct an A-to-B comparison, comparing what the “golden configuration” should be versus where it is in its current state. This enables Soldiers to isolate the problem to a specific configuration in minutes versus going through random troubleshooting steps that can take hours or longer, Hall said.

“It significantly reduces the complexity of installing, operating and maintaining the WIN-T Increment 2 system,” Hall said.

RVPS installs both in mass or just a single configuration or software modules at a time. Previously, if just a portion of a vehicle’s software was corrupted, or the unit needed to reload a newer version of a single software, they would have to load the entire image all over again from beginning to end. Now, units can use their maintenance laptop and load specific items separately as needed.

“RVPS speeds up the provisioning of WIN-T Increment 2 configuration items and provides long-term sustainment for the vehicles by enabling us to mass patch them, to look at the health of the hardware and software inside, and to be able to perform remote maintenance,” Paradine said.

The Army leverages Soldier feedback from user juries, theater and exercises like the NIEs to continually improve network capability and plans to do the same with RVPS. In turn, RVPS will provide the Army with feedback, a view into how Soldiers are actually using WIN-T Increment 2 in the field. This information will help the service to make future modifications to the WIN-T baseline taking into account actual field requirements.

“RVPS will enable the entire brigade to view at a glance the state and health of the hardware and software of the WIN-T Increment 2 configuration items throughout the formation, so Soldiers can focus on the fight and not the network,” Williams said. 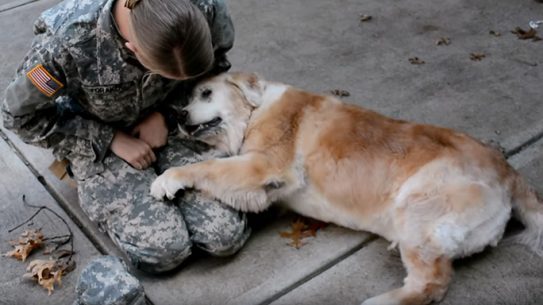 It's always an emotional experience when a soldier returns home, but it was especially...