Joel Turner is a member of the U.S. Army Marksmanship Unit. As such, he’s one of the finest shooters on the planet. Competing in the Open/Unlimited divisions of 3-Gun, Turner has multiple championships to his credit. Moreover, with a previous stint in operational units, Turner has a wealth of knowledge and training under his belt.

None of this, of course, means he would be exempt from a negligent discharge. And that’s exactly what Turner assumed must have happened recently, when during a training session, while conducting a shoot-reload drill, after inserting the second magazine, Turner’s pistol went off rather unexpectedly.

“I assumed that I just had my finger on the trigger,” Turner told Tactical-Life.com. “I was doing a slow-motion video of a shoot-reload drill, so I’m trying to go fast.”

Following the discharge, you can see Turner continue to present the pistol, then look down to see his magazine dropping to the ground. Turner said he immediately began trying to replicate the conditions, other than a possible finger on the trigger, that could have caused the pistol to go off.

“I figured my trigger was worn out at first and it slam fired, but I couldn’t get it to do it again,” he said.

When Turner finally reviewed the video of his training session, it became clear that an extremely rare set of conditions caused the gun to fire.

“A round popped from the top of the magazine during insertion and hit the sear/trigger bow when it seated,” Turner explained. “That’s also why the magazine fell back out, and you’ll see the culprit round falling after it. And for those that don’t know, there was obviously one in the chamber already from the previous magazine.”

The entire sequence of events, aside from the obvious example of the need for ever-vigilant safety, shows the benefits of using video in training sessions. Turner figured out what happened because he had good video. Moreover, he posted it to social media as a teachable moment for all.

“Had I not been videoing I would’ve just assumed I was an idiot and sent one into outer space on my own accord,” Turner said. “It took me watching a few times to figure out exactly what had happened.”

Above all, many shooters of Joel’s caliber probably wouldn’t be bold enough to post this video. No doubt there will be some that try to find fault with the shooter himself. However, the video serves as a great teaching tool for us all. Bravo to Turner for sharing. 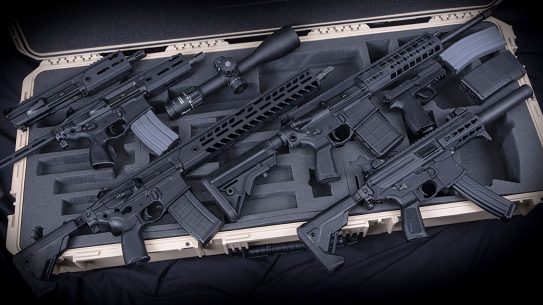 SIG Sauer was awarded a multiple weapons contract from US Army Contracting Command, including...