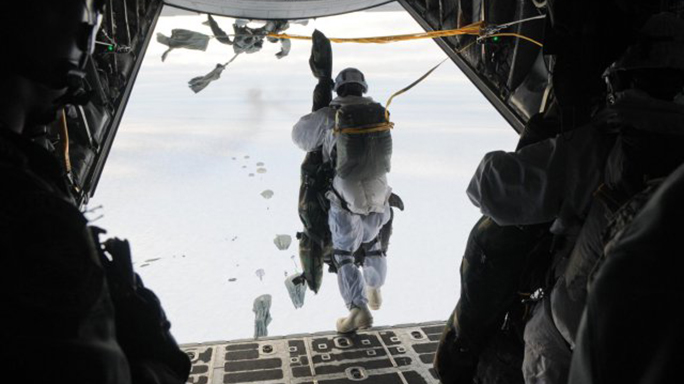 There’s cold, and then there’s cold. This story fits into the latter category. A team of paratroopers with U.S. Army Alaska’s 4th Infantry Brigade Combat Team (Airborne), 25th Infantry Division jumped into Alaska’s tundra north of the Arctic Circle, braving minus 30 degree temperatures and a wind chill factor of minus 56 degrees during an exercise dubbed Exercise Spartan Pegasus 15 last week.

The soldiers’ mission during this training scenario was to find and recover a crashed satellite containing sensitive data and equipment which, if taken by the wrong people, could pose a threat to national security.

Of course, since the satellite was simulated, the real goal of the exercise was “validate soldier mobility across frozen terrain,” which is “a key fundamental of U.S. Army Alaska’s capacity as the Army’s northernmost command,” the Army says.

150 soldiers participated in Exercise Spartan Pegasus 15. The exercise took place more than 800 miles north from Joint Base Elmendorf-Richardson, or JBER, Alaska. They arrived at their location in two Air Force C-17 Globemaster III aircraft and two Alaska Air Guard C-130 Hercules aircraft. The jump was made from the aircraft at around 1,200 feet and moving at 200 mph through the freezing air. Some soldiers got frostbite, but they were quickly evacuated in “small unit sustainment vehicles” and Chinook helicopters.

According to Col. Jeffrey Crapo, director of operations at U.S. Army Alaska, a small reconnaissance team made the jump carrying skis, while the rest carried snowshoes.

Upon landing, the soldiers on skis moved quickly to the crashed satellite while the soldiers on snowshoes set up a security perimeter. Some soldiers actually served as snipers with live ammo, since polar bears inhabit the area and pose a real danger.

Equipment got busted. For example, many of the SUS-V tracked vehicles stopped working, and some aircraft had issues and were grounded. But Exercise Spartan Pegasus 15 was deemed a success.

In addition to the soldiers’ performance, one of the key elements that contributed to the exercise’s success was command and control communications provided by the 307th Expeditionary Signal Battalion, 516th Signal Brigade, the Army says. The mission was the farthest north a command post node had been established by the unit.

Not bad for a day’s work.

“Individual and operational readiness is the key to our ability to fight and win the nation’s wars — in any climate,” said Brig. Gen. Lawrence F. “Larry” Thoms, commander, 311th Signal Command (Theater) and U.S. Army Pacific Command G-6. “We must train to survive and fight in extreme, cold weather because the mission of Army communicators is to be ready to enable operational commanders in any environment.”

Thoms watched the jump with a group of foreign military observers. 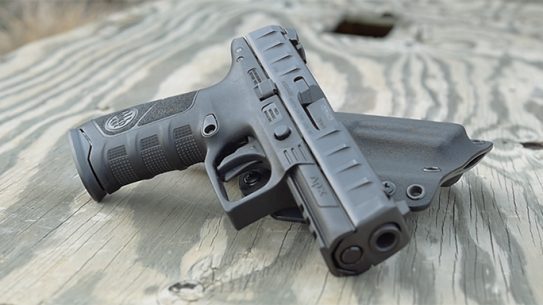 Built to 'win the fight,' the Beretta APX pistol is a full-size duty gun...