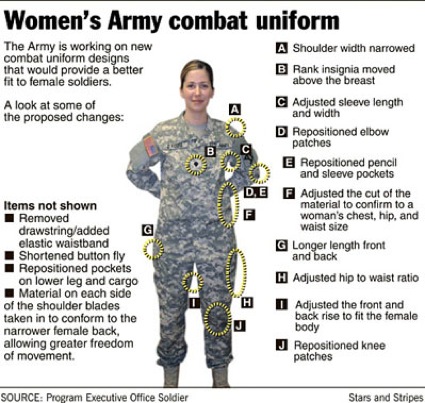 The new uniforms should be available in the next two to three years, according to Maj. Sequana Robinson, the assistant product manager for uniforms at Program Executive Office Soldier. “It is not a form-fitting uniform — it does not show off any curves or anything,” Robinson said. “It is just a better fit for the female body. It sets off a more professional look.”

Changes to the uniform were made following recommendations of female Soldiers during preliminary testing and research phases made by the PEO team.

“The biggest issue that a majority of females have with the current ACU is that the uniform was not designed for a female’s body,” said Staff Sgt. Jessika Malott, stationed at Fort Meade, Md. “The cut of the uniform and a female’s body type usually leaves us looking like a duffel bag.”

“Women have so many different shapes and sizes, we’re as not as ‘straight’ as men are,” said Robinson.

The current uniforms don’t fit female Soldiers as well as the Army would like, according to Lt. Col. Mike Sloane. Sloane is the product manager for Soldier clothing and individual equipment at PEO Soldier. Most of the improvements are being made in the sizing of the uniforms, such as narrowing the shoulder width or adjusting sleeve lengths.