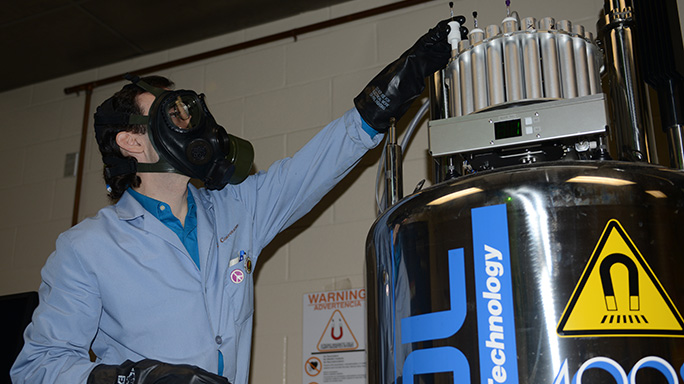 Chemist David McGarvey, Ph.D, of the Army's Edgewood Chemical Biological Center, on Aberdeen Proving Ground, Md., inserts a swatch of fabric into a nuclear magnetic resonance spectrometer. The swatch of uniform fabric has been treated with chemicals that can break down chemical warfare agents. The spectrometer is used to determine what those chemical warfare agents are broken down into when they come in contact with the fabric treatment (CREDIT: C. Todd Lopez)
(Photo by C. Todd Lopez)
Comment(s)

The following is a release from the C. Todd Lopez and the U.S. Army:

One day, Soldiers may wear uniforms and chemical protective suits that decontaminate themselves and are cool enough to wear for extended periods.

Researchers, such as chemist David McGarvey, Ph.D, at the Army’s Edgewood Chemical Biological Center, or ECBC, on Aberdeen Proving Ground, Md., are part of a team led by the Natick Soldier Systems Center that is developing just those technologies.

The idea is that uniform items are pre-treated with a chemical that can render things harmless including nerve or blister agents.

“We have collaborators at the Air Force Research Laboratory that design reactive chemical components that can be placed on fabrics,” McGarvey said. “If Soldiers are in the field, they may not know they have been contaminated. They might be going through a foliage area that had been previously contaminated, something might brush off on the uniform, or they might be in a position where logistically they can’t get to a decontamination area – either because of the mission or because there isn’t a decontamination setup available. We are trying to increase Soldier survivability through that type of capability.”

In such cases, McGarvey said, the chemicals built into the Soldier’s uniform begin working immediately to neutralize that contamination.

McGarvey is not developing those reactive components himself. Instead, he is taking swatches of uniform fabric – just one centimeter square – that have been treated with those reactive chemicals, applying one milligram of simulated chemical warfare agent – or the real thing – and then using a nuclear magnetic resonance spectrometer to determine what those chemical warfare agents are broken down into when they come in contact with the fabric treatment.

What he wants to determine is how the reactive agents work, and what is created as part of the reaction – and if the byproducts of that reaction are themselves dangerous to Soldiers.

“We are able to observe the chemical weapon material and we are able to identify the breakdown products and determine how well it works for decontamination,” McGarvey said. “We determine how effective the fabrics are at doing their job, and determine what the breakdown products are. We explain the mechanism of how these agents work, so the fabric developers can change their formulation and then make better fabrics.”

It is not just regular Army uniforms that may one day be pre-treated with such chemicals. At the forefront of the effort are replacements for chemical warfare protective suits that not only decontaminate themselves, but which are also lighter weight so they put less burden on the Soldiers who wear them.

Any Soldier that has worn the “Joint Service Lightweight Integrated Suit Technology,” or JSLIST, knows how uncomfortable the uniform can be. The ensemble usually includes the JSLIST suit itself, which is designed to keep chemical warfare agents from ever reaching a Soldier’s body, along with rubber gloves, rubber boots, a gas mask, and a hood.

The JSLIST suit is a challenge for Soldiers. For one, the suit decreases Soldier mobility. Additionally, while the suit provides chemical protection, it also comes with a significant heat burden – especially in warm climates – that greatly decreases the effectiveness of Soldiers.

“A lot of our theater operations are taking place in very hot climates,” McGarvey said. “The main problem the Army is worried about is, even if they don’t run into a chemical weapon, the Soldier could be rendered combat-ineffective just by wearing the suit. Within a few hours, for the JSLIST suit that is being currently used, there is a heat burden. In the desert sun it gets to be a problem.”

McGarvey said development is underway for a new product called the “Uniform Integrated Protective Ensemble,” or UIPE. The UIPE is meant to one day replace the JSLIST. Important requirements for the UIPE include a different design so that it is easier for Soldiers to move while wearing the suit: improved mobility. Also, the fabric used is meant to be thinner. Additionally, he said, the UIPE is being designed with specially designed vents that provide some breathability to the uniform.

The first iteration of UIPE – UIPE 1 – has already undergone field testing at Aberdeen Proving Ground, though it is not yet fielded, McGarvey said.

The UIPE 2, the follow-on design, is expected to include self-decontamination features as well, and will be a boon to those units that are most likely to come into contact with chemical warfare agents.

“We’re looking at Special Operations and things like that,” McGarvey said. “They want people to maintain a high level of mobility. There is less certainty that they are going into a contaminated area. So the idea is to have something that is flexible, lightweight, and which provides a certain level of protection.”

For Soldiers in the rest of the Army – non-Special Operations units – the UIPE could be equally effective.

On the horizon, McGarvey said, is UIPE 3. He said goals there include more efficient chemicals built into the fabric that can handle a wider variety of chemical warfare agents as well as a larger volume of such agents.

“We are always looking for something that is faster, more effective, and that can handle a higher amount of agent,” he said. “It’s also important that the materials be compatible with human skin.”

McGarvey said that some of the chemicals in testing now are already approved for human use. Some, for instance, are related to chemicals found in hand sanitizers.

“They’ve been [Food and Drug Administration] approved, approved for consumer use for human skin contact. And they’ve already been shown to be biocidal – one of the points of the suits is to protect against biological threats as well as chemical threats,” he said. “Since these compounds are known to be biocidal, it’s a good starting point. And we’ve also seen very good results against chemical weapons with some of them.”

The ECBC is not alone in developing agents that can be incorporated into the fabric of both regular military uniforms, as well as chemical warfare protective suits. The ECBC is part of a team that includes the U.S. Army Natick Soldier Systems Center, the Air Force Research Laboratory, the Massachusetts Institute of Technology, and the Defense Threat Reduction Agency. 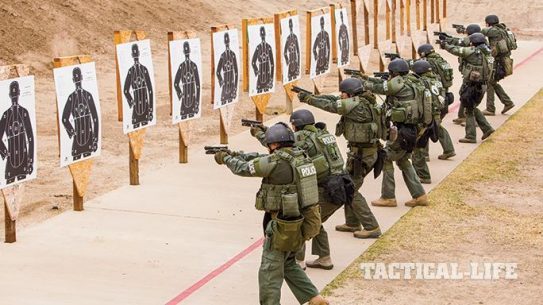