“Improving Army Force Generation,” was the focus and included detailed discussions about the latest lessons learned and best practices to prepare units, Soldiers and their families for war-time deployments. Participants shared how to better reset units upon their return and previewed innovative new planning tools to help provide these forces more stable, predictable deployment cycles in the future.

Working closely with the Army National Guard and Army Reserve, Forces Command mobilized and deployed about 680,000 reserve-component Soldiers since 2001.

While maintaining this busy operational pace, “Army Force Generation has proven to be a flexible and responsive process of Army systems that is meeting force-provider requirements in a condition where demand exceeds supply,” Campbell said. “Trust between Army components is at a historic high.”

“I encourage you to continue to partner with one another,” Campbell told the assembled Army Guard, Reserve and active-component Soldiers. We must sustain the partnership between the Guard, Reserve, First Army, Installation Management Command and installation senior commanders.”

United by common battlefield missions and a mutual concern for Soldiers and their families, the Army leaders focused on the U.S. Central Command theater of war operations, the evolving Army financial situation, reserve- component training priorities, as well as upcoming efforts to improve mobilization procedures, reunion, reintegration and reset.

The two-day conference’s readiness focus included updates on Forces Command’s Mobilization Tiger Team and an innovative new automation database – the Army Force Generation Synchronization Tool — designed to help military planners as the Army’s authoritative system for managing requirements and sourcing, beginning with the Fiscal Year 2011 Global Force Management cycle. This new system tracks hundreds of Army units as they transition from resetting after a deployment, training and becoming ready, and then becoming available for future missions.

As Forces Command planners built the new Army Force Generation Synchronization Tool, “we worked to ensure the resulting tool is able to accomplish five essential tasks,” said Col. Vincent J. Tedesco, chief of Forces Command Plans, G-3/5/7. “It must …consolidate validated joint and Army conventional force requirements and depict them over time; account for the Army’s conventional force inventory across all components; align inventory to requirements while facilitating analysis of effects of sourcing decisions; establish a common operating picture across the joint-military community; and make us better, smarter and faster.”

“We are pretty excited about what we have built,” Col. Tedesco told the commanders at Camp Robinson’s state-of-the-art Lavern E. Weber National Guard Professional Education Center. “This new automated database is linked with joint and Army authoritative databases… as requirements and inventory change – we get them automatically without manual entry. We have put the entire Army force structure of over 70,000 units from brigade combat teams down to detachments, from all components, and we have arranged them in hierarchical relationships.”

Given the deployment demands for Army units in Afghanistan and Iraq, Forces Command planners entered the sourcing history for all Army units for the past three years into this new, comprehensive inventory designed for force generation.

“Taking its cue from the Global Force Management process, the Army Force Generation process evolved to one that continuously synchronizes people, equipment, training, and formations over time to satisfy the requirements regional combatant commanders place on the Army,” Col. Tedesco said. “The ARFORGEN process encompasses mobilization and demobilization processes for National Guard and U.S. Army Reserve Component units and focuses on the questions of “Ready for what?’ ‘Resourced for what?’ and ‘When?’ to prioritize the allocation of resources.

Camp Robinson is home to the Army National Guard’s Professional Education Center, a 75-acre campus of 25 buildings and staff of approximately 420 who annually provide instruction to more than 20,000 members of the military. The Professional Education Center hosts more than 5,000 conferees annually from the National Guard, Army Reserve, active Army, Defense Department, state and federal agencies. 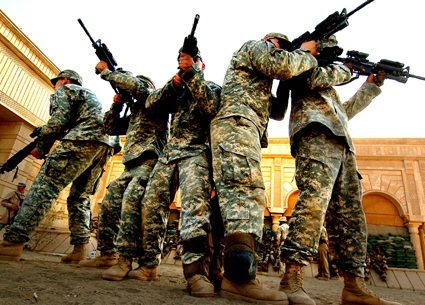