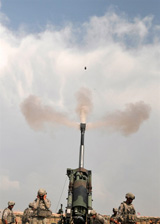 LAGHMAN PROVINCE, Afghanistan– Army Sgt. Carlos Medina is relaxing in his room at Forward Operating Base Mehtar Lam here when his radio breaks the silence. Medina and his unit are needed to provide field artillery support.

Medina leaps into action. “Fire mission!” he yells to the other artillerymen who live in the rooms adjacent to his quarters. All are assigned to 4th Infantry Division’s 3rd Platoon, Alpha Battery, 2nd Battalion, 77th Field Artillery Regiment, 4th Brigade Combat Team.

But his teammates already have sprung into action. The artillerymen have to be ready to go at any time.

Using the M-198 155 mm howitzer, their mission is to use illumination rounds to keep forward maneuvering units from getting ambushed at night and to provide fire support when patrols come into heavy contact.

Having donned their gear, the soldiers hasten toward the gun line knowing that time is of paramount concern.

Pfc. James Billasano, a 3rd Platoon artilleryman, explained why the initial moments of a fire mission are so frantic.

“We drop whatever we’re doing,” the Needville, Texas, native said, “because when we get the call, it’s game time; someone really needs us — lives can be at stake.”

“It’s a rush,” Medina added. “Once we get the call, we are ready to fire in about five minutes.”

As they head to out, the mission still is unknown.

“There’s an uneasy tension as you run down to the gun line,” said Army 1st Lt. Regan Tatford, fire direction officer and platoon leader for 3rd platoon. “The uncertainty of not knowing what the mission is for really gets your adrenaline pumping.”

To some of the Fort Carson, Colo.,-based soldiers, the first minutes are a blur, but not for the soldiers calling for support.

“That initial three minutes seem like an eternity to the guys needing our support, because they desperately need it,” Tatford said. “The faster we do our job, the faster they can do theirs.”

Oftentimes, the enemy is unaware of the artillery until it is too late for them and just in time for the forward soldiers.

“The enemy could be engaging our guys with [rocket-propelled grenades] or small arms,” Tatford said. “If we’re called up, [the enemy] wouldn’t know about us until the round impacts.”

This quick-strike capability is an asset to ground units and has the potential to save soldiers.

“We save lives,” Medina said. “Our job is to give them light to see and to watch their backs, and we’re having success doing that.”

The soldiers are able to provide support up to 18 miles away, he said, which gives the forward elements greater freedom to accomplish their missions.

The success they’ve had supporting forward soldiers has given them confidence in their abilities and trust in the skills of each other, Billasano said.

“It takes about eight guys and everyone has to be in sync for everything to go smoothly,” he said. “We trust each other’s skills.”

“I’m proud of these guys and what we do,” he said. “We have fired several times toward [Combat Outpost] Nagil when the COP was being directly attacked and helped neutralized the enemy there.”

“It’s rewarding,” Tatford said. “It is a great feeling to have someone come on the radio and say, ‘thanks, you guys really helped us out.’ But it’s our job; it’s what we signed up to do.”

Medina said he’s grateful for the opportunity to serve his country.

“I’m proud to be here,” he said. “I feel like we are making a difference.”