Border Patrol agent Glenn Pickering slowed his rumbling snowmobile to a stop and eyed two trails of churned-up snow running down a riverbank.

They were snowmobile tracks leading out onto the ice of the frozen St. Lawrence River that runs between upstate New York and Canada. At night smugglers race across the ice with bags of marijuana. Pickering shielded his eyes with his hand as the wind covered the tracks; he couldn’t see whether they went all the way across the border.

“There are all these islands out here, and the snowmobiles just come shooting across,” Pickering said. “It’s a constant battle.”

This is the United States’ forgotten border, where federal agents and police play cat-and-mouse with smugglers and illegal immigrants along 4,000 miles of a mostly unmarked and unfortified frontier with Canada. Unlike the southern border with Mexico, where drug-related violence has exploded in recent years, the northern border rarely makes headlines.

That changed this month after the U.S. Government Accountability Office released a report warning that the terrorist threat from Canada was higher than from Mexico because of the vast swaths of unprotected frontier. Just 32 miles of the 4,000-mile border have an acceptable level of Border Patrol security, with agents available to make on-site arrests, the report said.

“Our country is so focused on the southern border,” said Rep. Candice Miller, R-Michigan, who will chair a hearing about the report on Tuesday. “At the same time the northern border is essentially wide open.”

Source: The Associated Press via WSJ. 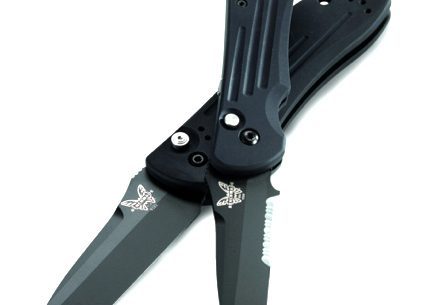 The 9101 Benchmade Auto Stryker knife offers a stronger locking button and open back...