SAN ANTONIO, Dec. 13 /PRNewswire-FirstCall/ — AT&T Inc. (NYSE: T)
today announced a donation of $1 million to the National Infantry
Foundation for the construction of the new National Infantry Museum and
Soldier Center. The museum, being built outside Fort Benning, Ga., will
tell the story of the American infantryman from the Revolutionary War to
modern times. It is scheduled to open in 2008.

“For more than 200 years, infantrymen have served our country with
pride and honor, and this museum will help to preserve the legacy of those
who understand the true cost of freedom,” said Cathy Coughlin, AT&T senior
executive vice president and global marketing officer. “AT&T is proud to
have the opportunity to show its gratitude to America’s military personnel
by helping to commemorate and celebrate the soldiers who have served this
country.”

The National Infantry Museum will reside on 200 areas of land and will
include 150,000 square feet of artifacts, exhibits and interactive
displays, as well as a 3-D IMAX theater. The museum will be surrounded by a
parade field, a memorial walk of honor and a World War II company street.

“This gift not only affirms AT&T’s commitment to the communities it
serves, it demonstrates the company’s allegiance to soldiers and their
families and the sacrifices they make for our freedom,” said retired Maj.
Gen. Jerry A. White, president, National Infantry Foundation. “I’m proud to
have AT&T partnering with us on this initiative, which will bring long
overdue recognition of the infantry.”

For more than 85 years, AT&T has remained dedicated to supporting
active military personnel, their families and veterans through charitable
contributions, event and program sponsorships, hiring of military veterans
and maintaining policies that support reservists when called to active
duty.

AT&T Inc. (NYSE: T) is a premier communications holding company. Its
subsidiaries and affiliates, AT&T operating companies, are the providers of
AT&T services in the United States and around the world. Among their
offerings are the world’s most advanced IP-based business communications
services and the nation’s leading wireless, high speed Internet access and
voice services. In domestic markets, AT&T is known for the directory
publishing and advertising sales leadership of its Yellow Pages and
YELLOWPAGES.COM organizations, and the AT&T brand is licensed to innovators
in such fields as communications equipment. As part of its three-screen
integration strategy, AT&T is expanding its TV entertainment offerings.
Additional information about AT&T Inc. and the products and services
provided by AT&T subsidiaries and affiliates is available at
http://www.att.com.

About The National Infantry Foundation

The National Infantry Foundation is conducting an $86 million fund
raising campaign to build a new National Infantry Museum and Soldier Center
at Patriot Park, a 200-acre tract linking Columbus, Georgia, and Fort
Benning, the Home of the Infantry. The world-class facility will honor the
232-year legacy of valor and sacrifice of the Army’s largest branch, the
Infantry. The project includes a museum, parade field, memorial walk of
honor, authentic World War II Company Street and 3-D IMAX Theatre. For more
information, visit http://www.nationalinfantryfoundation.org. 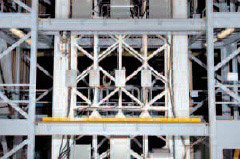