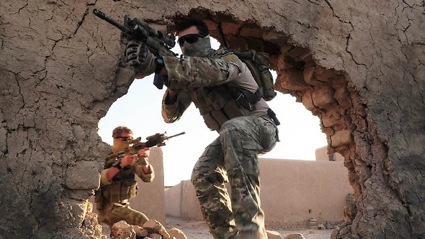 After nine years of pleading for effective camouflage clothing, Australian soldiers in Afghanistan soon will go into battle wearing the same “cams” as American troops.

The Gillard Government today will announce a trial of the US-made MultiCam camouflage clothing will be extended to all Diggers going “outside the wire” during the next 12 months.

That means about 1000 troops finally will be issued with combat clothing that will allow them to blend in with the local environment.

For years, the Diggers have complained about moving around the grey desert, brown compounds and bright green “green zones” like sitting ducks. Their cams were suited to either “grey/brown” or “green” but never both.

Australian SAS soldiers serving throughout the war-ravaged country secretly trialled the American gear, which costs $400 a set, during the past few months and Defence has been told to order the new clothing as a matter of urgency.

The move has been hailed by the soldiers and welcomed by observers although some argue it was emotionally important for Australian soldiers to be differentiated from their American comrades.

Retired Major General Jim Molan said it was vital to have the best kit, but it should be “obviously” Australian.

“If the soldiers want it and it is good then give it to them, but it is a shame we can’t produce good gear that is uniquely Australian,” Maj Gen Molan said.

The Diggers will be distinguished only by their national markings and, in some cases, by their Austeyr rifles.

If the trial is successful, all special forces and infantry soldiers and others deployed to Afghanistan will be issued with clothing that provides maximum camouflage effect in the desert, urban and “green zone” environments.

Battles in Afghanistan are fought in either the bright green fields of the river valleys, nearby compounds or qalas, or in the adjacent grey/brown dasht or desert.

All troops in Afghanistan have been issued with disruptive pattern jungle uniforms and desert camouflage uniforms, but neither offers much protection outside those two environments.

The Australian Army has been trialling its own disruptive pattern “midpoint” version for the clothing that sought to combine both jungle and desert aspects in the one fabric.

But soldiers complained that it made them stand out like a “neon bullseye” and that it would put their lives at risk.

“This is the uniform they want to wear,” he said.

“The camouflage pattern provides troops with greater levels of concealment across the range of terrains in Afghanistan – urban, desert and green.”