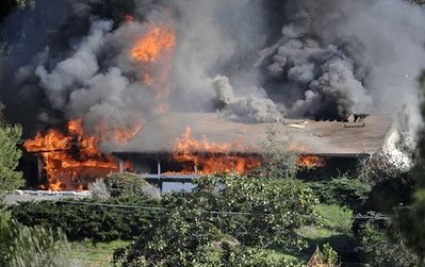 A house erupts in flames on Thursday, Dec. 9, 2010 during the controlled burn of a home in Escondido, Calif., that was so packed with homemade explosives that authorities claim they had no choice but to burn it to the ground. The house was rented by an out-of-work software consultant who allegedly assembled an astonishing quantity of bomb-making materials that included chemicals used by Middle Eastern suicide bombers. (AP Photo/Denis Poroy)

A fire intentionally set Thursday to destroy an explosives-filled house in a suburban San Diego neighborhood rapidly consumed the structure without major problems as fire crews and curious onlookers watched.

Authorities said the home was so packed with homemade explosives that they had no choice but to burn it to the ground.

Remotely controlled explosive devices ignited the home in Escondido and it quickly became engulfed in flames as thick smoke rose high into the sky, going just as authorities had planned to avoid spreading toxic fumes through the community.

The fire began with puffs of smoke that rapidly grew larger and shot through the roof before spectacular orange flames overtook the house. Popping noises heard during the fire were likely hand grenades and ammunition, officials said.

At the height of the fire, Shirley Abernethy, 82, stood on a neighbor’s porch about a block away from the fire. Scores of others living closer to the home were evacuated the previous night.

A house erupts in flames on Thursday, Dec. 9, 2010 during the controlled burn…