by Deb Ferns
in News
0

To set the record straight, I now own a lot more than three guns, even though I never shot one until my 45th birthday. Fast-forward to over 10 years later, with a variety of shooting sports under my belt, I have to admit that my favorite form of competition involves action shooting events. These matches are organized under the guidance of the U.S. Practical Shooting Association and held across the country. Though I participate on a monthly basis in USPSA handgun events, I try to shoot multi-gun—i.e. 3-Gun events—at least three to six times a year.

These multi-gun matches comprise several individual stages with each stage timed by a range officer who stays behind you on the course. After the course of fire is timed, then the targets are scored for accuracy. This combination of time and accuracy is what gives each shooter his/her score for each stage. Each shooter competes in a group based on the equipment they are using. For instance, classifications can vary from Open & Compensated Division to Tactical Division with Scopes, Tactical Division with Iron Sights, etc.

3-Gun Basics
Getting back to the actual 3-Gun match, at each individual stage the competitor shoots one gun at a time, though the stage description commonly requires that a specific type of target be engaged with a particular firearm or with a certain type of ammo. So, for example, on one stage a competitor might start out shooting a long-range rifle, then retire that gun safely in a safe, pre-designated place to take on new targets with an alternate gun—and the clock is ticking. On a regional level, a multi-gun event is usually held one day per month and sees an average of 75 to 100 competitors. On a national level, these events are two- to three-day formats with an average of 300 to 350 competitors. If you make it to the world championship level, where the 24-stage competition lasts five days, the number of competitors grows to well over 1,000 people.

If you’re the type of person who enjoys a thinking game with lots of adrenaline going, this is the shooting sport for you! You need to be able to control and operate a variety of firearms safely and with speed—it’s the ultimate high. When I started multi-gun events several years ago at age 50, I knew I would never be a national champion. I started in the game a little too late for that. But I challenged myself to participate as a way to “walk the talk” for what I preach at our Babes with Bullets camps (babeswithbullets.com). 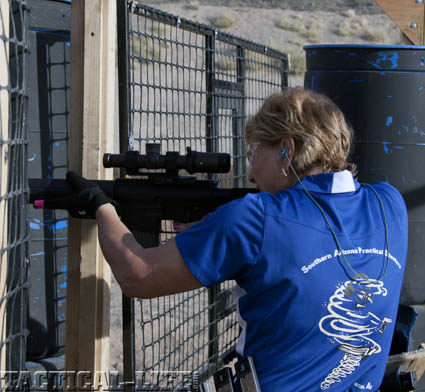 Deb Ferns competes for her home range, Tucson Rifle Club, in the Heavy Metal Division of multi-gun. She is shooting a .308 DPMS Panther with a Vortex 1-4X scope.

These camps are part of my mission to encourage women to participate in something outside their comfort zone, usually with an introduction to firearms. If you aren’t familiar with the Babes with Bullets program, it started in April 2004, when I met a world and national shooting sports champion, Kay Miculek, while attending a “ladies only” camp at the her home range outside of Shreveport. Since 2004, Kay and I have combined forces, along with several other female instructors, traveling to various regions of the U.S. to host the three-day camps. Now, eight years later, we have over 2,000-plus camp alumni and we couldn’t have done it without Smith &Wesson as our Foundation Sponsor.

The camps are offered at a discount based on financial support by S&W and women can “try before they buy” because of S&W providing loaner firearms as well. We have been blessed with several other awesome sponsors throughout the years, including Atlanta Arms & Ammo, who has stepped up again and again to make sure our camps have ammo available to the campers at a discounted price. 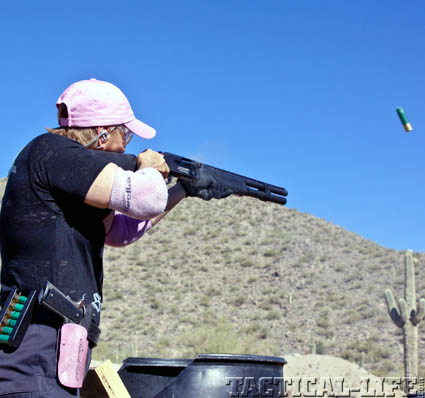 Run & Gun
I won’t deny that this hobby is expensive in terms of purchasing firearms, entry fees, traveling to matches, etc. I compete at the action shooting programs as often as I can between working my “real job” as an association meeting planner, being the camp director for the Babes with Bullets programs, and serving with an active role as the chair of the board for the Women’s Outdoor Media Association. Even with my husband helping me with equipment preparation and ammo reloading, it’s still a high-maintenance hobby.

Another element you have to consider is the need to work on your physical endurance to be able to “run and gun” at these events. The reason its called action shooting is that you are always moving, working out of a holster, and sliding in and out of various positions on the course of fire. My 50-plus-year-old body isn’t keen on being bruised, and I’m not willing to inflict pain by sliding somewhere I shouldn’t, so I pick my way through a match a bit more carefully. My training routine to be able to compete is a combination of a strength-building program and yoga practice.

It came to my attention that women don’t compete in the Heavy Metal division of multi-gun, probably due to having to run with and balance larger heavier guns. Well, that whole challenging myself to do something outside my comfort zone kicked in and I competed in the Heavy Metal division at the Superstition Mystery Mt. 3-Gun national event (SMM3G), held annually in Mesa, Arizona. While I didn’t come in first, I also didn’t come in last, so it’s another lesson learned for me and I look forward to competing in the Heavy Metal division in future multi-gun matches. The Heavy Metal category is relegated to a .308 rifle with a 150-grain bullet instead of utilizing my AR-15 with a 55-grain bullet. It’s mandatory in Heavy Metal to use a 12-gauge shotgun and a .45-caliber, single-stack, 10-round handgun versus a 9mm or .40 with high-capacity magazines that can hold 17 to 20 bullets.

Babes with Bullets
For the first time in 2012 our Babes with Bullets program introduced a 3-Gun camp and it filled up in less than 48 hours. That says a lot about the growing popularity of multi-gun and I sense this is because of hit shows on TV like Top Shot , Hot Shot and 3-Gun Nation. We’ll be offering another 3-Gun camp in 2013, so standby for more info on when/where to be posted at our Babes website. We are also developing a 3-Gun webisode for OutdoorChannel.com, where we have a wide variety of our training tapes from other Babes camps archived. For more information, visit www.OutdoorChannel.com/BabeswithBullets.