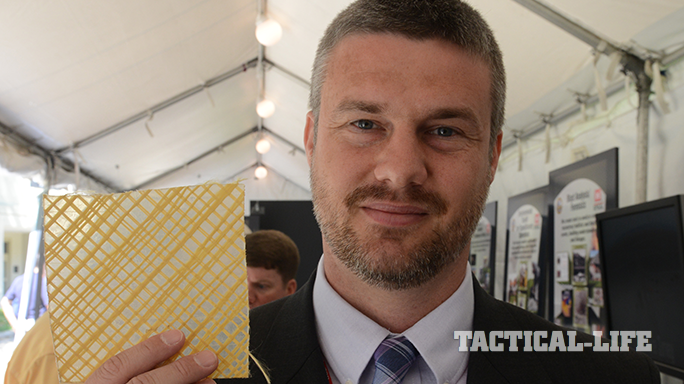 Nick Boone, a research mechanical engineer with the U.S. Army Corps of Engineers' Engineer Research and Development Center, in Vicksburg, Miss., shows a section of ballistic wallpaper during DOD Lab Day at the Pentagon, May 14, 2015.
(Photo by David Vergun)
Comment(s)

Troops often use abandoned masonry, brick or cinderblock structures for defensive purposes instead of building their own or digging foxholes.

While these structures offer a degree of protection, they are blast impact from missile or other large projectiles, said Nick Boone, a research mechanical engineer with the U.S. Army Corps of Engineers’ Engineer Research and Development Center, or ERDC, in Vicksburg, Mississippi.

Boone spoke during DOD Lab Day, at the Pentagon, May 14, where a large number of Army laboratory exhibits were on display.

Engineers at ERDC came up with a novel idea of fortifying these structures with rolls of lightweight ballistic wallpaper with adhesive backing that can quickly be put up on the inside of the walls, he said.

Without the wallpaper, a wall that is hit will “rubblize,” he said, sending shards of rock and mortar flying at the occupants inside.

When the blast occurs with the wallpaper installed, it acts as a “catcher’s net,” containing the rubble and preventing debris from injuring Soldiers.

Engineers built unreinforced structures and actually bombed and blasted them, Boone said, showing a video of the experiments. Small blast testing was done at nearby Fort Polk, Louisiana, and large-blast testing was conducted at Eglin Air Force Base, Florida.

Ballistic wallpaper is still in the research and development stage and does not yet have an official name, but it could one day be produced and fielded and hopefully save lives, Boone said.

Improved protection mortar pits and guard towers, designed by engineers at ERDC and royal engineers from the United Kingdom, have recently been shipped to Afghanistan, Boone said.

ERDC engineers developed the Modular Protective System, or MPS. These are inexpensive, lightweight, easily-assembled and disassembled panels attached by cross-braces, which offer “a lot of protection,” he said. The panels were developed by ERDC and the cross-braces were developed with collaboration from the royal engineers.

“We got the idea from picnic chairs that fold up neatly,” he said.

The structures are pretty basic, he said. The braces are made of lightweight galvanized steel tubing and the panels are made of multi-layered fiberglass.

Boone showed models of the fortification as well as full-sized versions. They resembled scaffolding. The steel tubing is crossed-braced at angles that afford the greatest strength, he said. It is strong enough to protect against military-grade rounds.

Besides being inexpensive, strong and lightweight, the MPS can be quickly assembled with by just a few Soldiers without any specialized tools or equipment, he said.

Once the mission ends, everything gets packed back into the shipping container. Nothing gets wasted or left behind, he said.

MPS is standing by for licensing and for a possible transition to a program of record, he said.

Dr. Brandon Lafferty, a research soil scientist with ERDC, said that while operating in enemy territory, Soldiers sometimes come across existing infrastructure that poses threats that cannot be seen.

“Sometimes, those buildings were abandoned for a reason,” Lafferty said. “They may have been a chemical processing site, a waste dump, we just don’t know. There are currently no portable tools to rapidly determine possible hazards.”

Soldiers on the move often do not have time to wait for heavy test equipment to be trucked in and tested by specialists, he continued.

ERDC engineers developed the “Environmental Toolkit for Expeditionary Operations” to address this problem, he said.

An engineer, who is not a specialist, can toss all the instruments he needs in his rucksack and determine if contaminants are present and what their levels of concentration are, he said, so that a commander can make an informed decision whether or not to occupy the structures or area.

The three pieces of gear used for testing include the Hand-held Fluorescent Spectrometer, which measures heavy metals in soil and water; the Petroleum Environmental Test Kit, which identifies and measures petroleum content in soil and water; and the Water Dog, which tests water properties for hardness, acidity, conductivity and turbidity to determine if the water is contaminated, good for drinking or maybe just clean enough for washing clothing.

When Soldiers decamp, the area is tested once more because of environmental reporting that requires an area to be left uncontaminated, he said.

Soldiers are being trained to use the test equipment at the Maneuver Support Center of Excellence on Fort Leonard Wood, Missouri. Test equipment is now being field tested in Kuwait and Iraq, he said.

VIDEO TELECONFERENCE IN A SUITCASE

When Soldiers need to set up an outpost or bivouac in an unfamiliar area, there might be hazards nearby like landslides or flooding that they’re not aware of.

To determine if the location is safe, Soldiers can contact the experts at ERDC who have all of that information readily available, said Vernon Lowery, general engineer, ERDC.

To make contact in remote areas possible, ERDC has supplied the entire Army with Telecommunications Equipment Deployable, or TCED. This video teleconferencing capability comes in a small suitcase that is easily carried by one person, he said. The communications equipment links to Vicksburg via satellite.

Soldiers in remote areas might also want to communicate with people other than at ERDC for various reasons. Lowery said ERDC can relay them to Video Teleconferences, or VTCs, elsewhere around the world.

For example, when Soldiers deployed to Haiti to assist with earthquake humanitarian assistance relief in 2010, they used TCED to establish command and control. Lowery said Soldiers told him it was their “lifeline,” and without it, they could not have accomplished their mission.

Laser guns may sound like the stuff of science fiction, but engineers at the U.S. Army Space and Missile Defense Command – Technical Center at Redstone Arsenal, Alabama, have successfully developed and tested just such a system, known as High Energy Laser Mobile Demonstrator, or HEL MD.

Once the laser locks on, it essentially fries its target, Formby said. It is a cost-effective way to destroy cruise missiles, unmanned aerial vehicles, mortars, rockets and artillery.

In good weather, the laser achieves a high success rate, he said. Right now, the system does not perform as well in degraded weather and atmospheric conditions. Distance-to-target remains classified.

In 2017, a 50-kW version will be tested, followed by a 100-kW demonstration in 2020. Higher power means quicker kill-time of the projectile, he said, because more power is on the target. 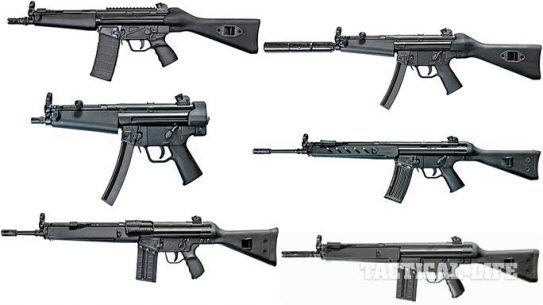