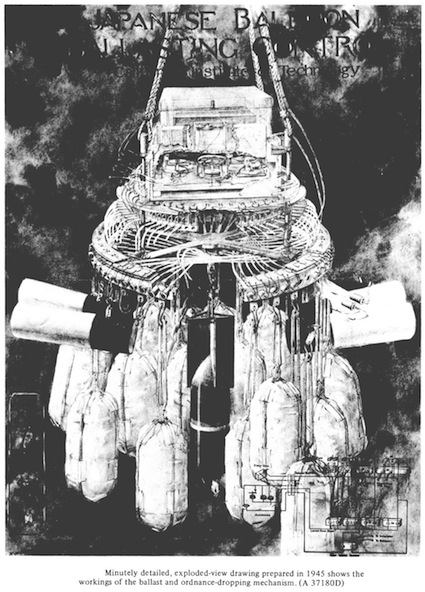 Forensic geologists identified the NE coast of Japan as the source of the sand ballast, thus the probable launch point. American recon of the areas in early 1945 identified two of three plants producing hydrogen for the project in the vicinity of Ichinomiya, and these were destroyed by B-29s flying out of the Marianas in April 1945. With other pressing considerations, and no knowledge they were having any effect, Japan gave up on the “Vengeance Balloons.”

When folks along the West Coast went to the beach 70 years ago, they always brought home flour sacks of fine beach sand, which they dried and kept in their attic in boxes, with a shovel. Not because they kept a cat in the attic, but because fine sand was the best way to fight the magnesium firebombs the Japanese were sending over by the tens of thousands on hydrogen-filled, mulberry-paper balloons assembled by schoolgirls.

Japan released the first of these bomb-bearing balloons on November 3, 1944. It was a pretty low-tech precursor to the U.S. Army’s saturation firebombing of Japanese cities, but the balloon bombs were getting here, some crossing the Rocky Mountains and coming down in Alaska, Washington, Oregon, California, Arizona, Idaho, Montana, Utah, Wyoming, Colorado, Texas, Kansas, Nebraska, Nevada, South Dakota, North Dakota, Michigan, Iowa, British Columbia, Saskatchewan, Manitoba, Alberta, the Yukon, Northwest Territories and Mexico. One that landed near Yerington, Nevada was discovered by cowboys who cut it up and used it as a hay tarp, another by a prospector near Elko who brought it in to local authorities on his burro. In all, seven fire balloons were turned in to the Army in Nevada, Colorado, Texas, Northern Mexico, and even the outskirts of Detroit. Bits of washi paper were found in the streets of Los Angeles.

On March 10, 1945, one of the last paper balloons petered out near the Manhattan Project’s production facility at the Hanford Site, Washington, and caused a short in the power feed for the nuclear reactor cooling pumps, but backup safety devices restored power almost immediately. Two landed back in Japan but caused no damage.

As the jet stream was largely unknown then, few Americans believed the balloons could have come directly from Japan: They must be coming from North American beaches, launched by landing parties from submarines. Wilder theories speculated that they could have been launched from German POW camps in the U.S., or even from Japanese-American internment centers.

The control system ran the balloon through three days of flight. By that time, it was likely over the U.S., and its ballast was expended. A final flash of gunpowder released the bombs, and lit a 64-foot fuse. After 84 minutes, the fuse fired a flash bomb that destroyed the balloon.

The balloon had to carry about 1,000 pounds of gear. The first balloons were made of conventional rubberized material. An order went out for 10,000 balloons made of washi paper derived from mulberry bushes that was impermeable and very tough. It was only available in squares about the size of a road map, so it was glued together in three or four laminations using edible konnyaku (“devil’s tongue”) paste. Hungry workers stole the paste and ate it. Many workers were teenage schoolgirls, who assembled the paper all over Japan. Large indoor spaces, such as sumo halls and theatres. were required for the envelope assembly. Similar, but cruder, balloons were also used by Britain to attack Germany between 1942 and 1944, but with more telling effect.

Had it been done with more insight, it could have been quite effective. That the bombs were getting here and spreading across Canada and as far as the Midwest was one of the best kept secrets of the war—until a Sunday-school teacher and several little kids were killed by one of the infernal devices in southern Oregon. 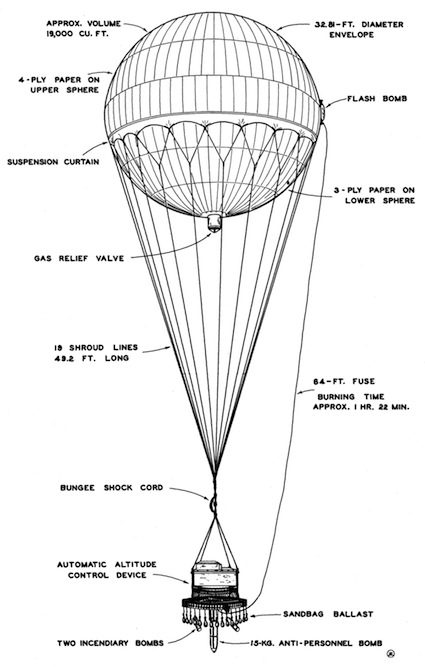 Made from high-strength, gas-proofed mulberry paper, the Japanese expected about 10% of these balloon bombs to make it across the ocean on the jet stream, a figure that agrees with Allied observations. Thus, some 600 are still unaccounted for in North America, still potentially deadly. (U.S. Army drawing)

After that point, the main acknowledgements of these attacks were discrete posters warning folks what they looked like, and not to mess with them. Officials released limited information about balloon bombs on May 22, 1945, and on June 1 lifted the blackout on the explosion’s cause. Because the Japanese did not believe Americans could keep a secret, the program had been discontinued a couple months earlier as ineffective.

The Office of Censorship had for the most part been successful in a news blackout, although there had been hundreds found, plus many shot down by U.S. and Canadian fighters.

The posters remained up for years after the war, as some 9,300 balloon bombs had been launched, and only 300 still have been accounted for. Some have been found as recently as 1978. There is no doubt that hundreds are still out there, and still potentially deadly, as well: it has been projected by both the Japanese and U.S. authorities that some 10% made landfall in North America, leaving some 600 still unfound. They carried a varying mixture of high-explosive and incendiary loads.

The typical fusen bakudan (balloon bomb) launched to ride the jet stream from Honshu to North America was 33’ in diameter and held aloft by 19,000 cubic feet of hydrogen. More than 9,000 were released from November 1944 to March 1945. This specimen was shot down intact by Navy fighters near Alturas, CA on 10 January 1945, and re-launched by U.S. authorities. (U.S. Army Signal Corps photo)

Well, It Looked Good On Paper
Some official concern at the time centered around our knowledge of the Japanese Unit 731 germ warfare experiments in Pinfan, Manchuria. The U.S. was not without its own countermeasures, however. Project Firefly was one system set up with airplanes and 2,700 troops, 200 of them paratroopers, who were stationed at spots which were considered hazardous areas for use in fire-fighting missions should those become unnecessary. Lightning Project was a system set in place where vets, 4-H clubs, agricultural colleges, etc, were told to be on the lookout for “the first sign of any strange disease in livestock or crops.”

If you are sitting at maps in Tokyo, the heavily timbered American West Coast probably looks like a potential tinderbox, and these balloon-borne bombs almost all carried incendiaries, with an explosive bursting charge designed to disperse the smaller incendiary devices, or typically a 33-pound HEAP bomb. It was evidently the detonation of one of the latter that killed Mrs. Elsie Mitchell and the five children on Gearhart Mountain, Oregon on 5 May 1945. These were the only American deaths from enemy action in the Continental United States in WW II.

But it was the incendiaries that were the most wearisome. The Portland, OR defense coordinator Edward Boatwright put the situation in practical perspective:

“There just isn’t any fire department in the world that can be in a thousand places at one time. But incendiary bombs only start small fires and if the people can put out 990 of the 1000 fires while they’re still little ones the fire department can take care of the ten that aren’t caught in time and have become big fires.”
To help homeowners fight those 990 smaller fires, the Portland and Multnomah County Defense Council distributed instructions on how to fight magnesium incendiaries with sand, shovels and rakes. Thus in every attic you would find boxes of sand, years after the war. The tools, of course, were returned to the garden shed, since the war was over. But the sand? “It ain’t hurting a thing where it is, Honey, and it’s heavy.” 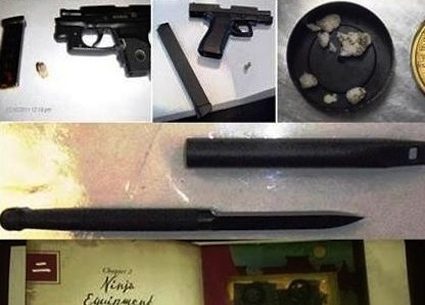