Baltimore police have released partial body cam footage showing the dramatic moments before one of its officers was forced to shoot and kill a man holding two children at knifepoint last Friday morning.

Officers responded to a call of an armed man with a knife inside a house on North Fulton Avenue at around 6:45 a.m. They were told by the family there that 39-year-old Reno Owens Jr. — a homeless relative who had been allowed to stay at the house overnight — was on drugs and behaving erratically.

Owens had barricaded himself in a bedroom with two children, a one-year-old boy and four-year-old girl. He was holding what has been described as a large butcher knife.

Police ordered Owens to drop the knife and let the children go, but he ignored them. Instead, he said things like “Go get the father now! Your daughter is gone, cuz” and “You had to rock the cradle, cuz. Ain’t gonna be no tomorrow.” At one point, he also chillingly sang “Rock a Bye Baby” to the children, who were screaming and crying.

“Out of fear for the absolute safety of those children who had a knife in close proximity to them being pointed at their bodies, officers were forced to fire a round, striking the suspect,” said T.J. Smith, a spokesman for the Baltimore Police Department.

Officer Zachary Wein, a SWAT member and 14-year veteran of the department, fired the fatal shot. He has been placed on administrative leave.

In the body cam video, which was viewed in full by select journalists but only partially released to the public, Wein’s supervisor tells him: “I want you to walk in there and kill this guy. He is highly agitated, has a knife at the kids’ throats. There’s no need for less lethal.”

Wein can then be seen climbing the stairs and aiming his M4 rifle. He tells Owens he doesn’t want to hurt anyone before taking the shot.

Baltimore Police Commissioner Kevin Davis said they didn’t release the full body cam footage publicly out of fear that it would traumatize the family.

“We decided to show it to a group of journalists, professionals and allow you to describe it and the alternative is unacceptable to me. I am not going to make a decision that will further traumatize a family or a four year old and a one year old,” Davis said.

The children were thankfully unharmed as a result of the incident.

“Obviously this was a last resort and not something anyone wanted to be in this morning,” Smith said. “But when a 4-year-old and a 1-year-old are being actively threatened as a last resort, deadly force had to be used … If it didn’t go right, we would be standing here talking about an injured or deceased 4-year-old or 1-year-old.” 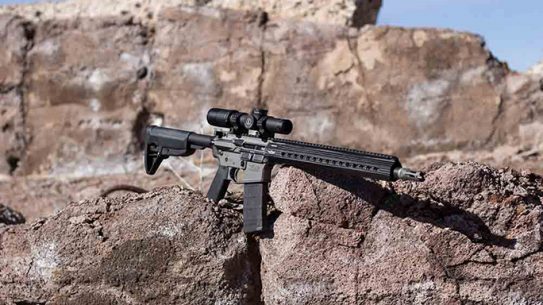