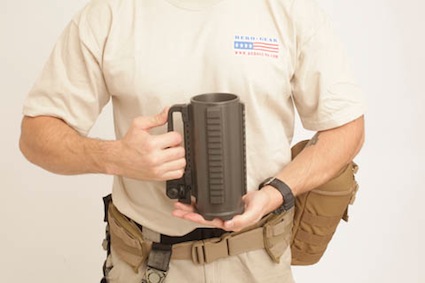 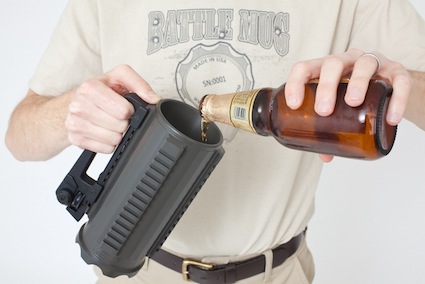 Battle Mug, the ultimate drinking vessel, is pleased to announce the launch of their new website and online store.

The Battle Mug project started over two years ago when a bunch of old Army buddies sat around and contemplated what they should do with the slug of M4 carry handles they had laying around.

As the beer flowed and the project matured, a few things were certain:

Second, they insisted on no compromise in the production method or materials. Sure, there are ways to make Battle Mug offshore by 9 year old kids, or by using some cheaper method of production like casting, but that just somehow seems un-American. 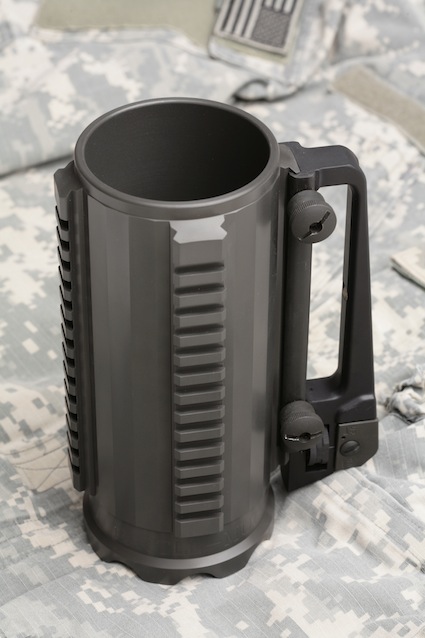 So, as these Vets pondered the question: “What is Battle Mug?” they thought back to the Old Army days when a unit coin actually meant something.

Remember that? Do you remember the first time your Commander placed a coveted coin in your hands? Usually they had your name engraved, but at the very least they always had a serial number. A unit coin was a prize to be earned, not something that just got handed out to every Private in the platoon just for showing up to work on time 3 out of 5 days that week.

So what if Battle Mug came to represent more than just a kick-ass beer mug?

What if they put a serial number on it? What if your mug was something that represented a special event (Hail and Farewell at the unit) , an assignment, or deployment? At this point, they felt we were on to something.

To date, Battle Mug has done exactly what we set out to do: Provide something unique and cool, but it’s certainly not for everyone!

Apparently, they are on to something. They are honored to have owners from:

Battle Mug starts life as a 13.5 pound solid block of 6061 T6 billet aluminum before it enters a state of the art CNC facility in Huntsville, Alabama. This facility produces specialized parts and equipment for the U.S. Department of Defense, major weapons manufacturers, NASA, and a host of other companies working at the U.S. Rocket and Space Center.

Each individually serialized Battle Mug is built with the Operator in mind and features Mil-Spec Type III anodizing and a crenelated base.

Whether you are fighting drug lords deep in the jungles of Colombia, stomping out Al Qaida terrorists in Fallujah Iraq, fighting off the undead as Zombies try to eat your brain, or eradicating no-good hippies in Berkeley, California,
Battle Mug is there.

It’s built to take abuse and will be there to offer you a frosty 24oz. reward once the mission is complete. Battlemug.com.

Battle Mug, the ultimate drinking vessel, is pleased to announce the launch of their…