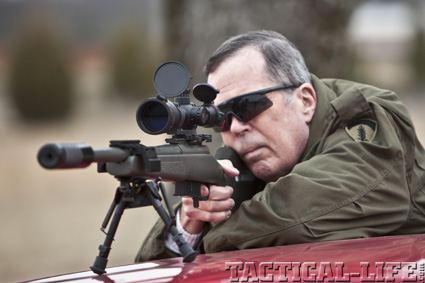 Long time Harris Publications writer Charles Q. Cutshaw died Sunday, June 12, 2011. He was a U.S. Army officer who served in Vietnam and received the Bronze Star. He continued as a public servant, working as a Department of Defense civilian for the U. S. Marine Corps at Quantico. Aside from his voluminous works for Harris Outdoors and Tactical publications, he was an editor for firearms reference books and wrote for other outlets. After retiring from federal service, he returned to Alabama, where he was a reserve officer for the Killen, AL Police Department. He is survived by his loving family and his numerous colleagues in the outdoors industry.

Most Harris Publications readers will be familiar with Charlie Cutshaw, arguably the most prolific of regular contributing writers over the past several years. His work graced the covers of many periodicals, but most often Guns & Weapons for Law Enforcement.

There was good reason for this. Not only was Charlie an accomplished writer, but he brought real-world knowledge and experience to the pages of these magazines, having served in Vietnam as an officer in the U.S. Army infantry and as a reserve police officer for the Killen, Alabama, Police Department. Charlie was able to write expertly on his subject, having been tasked with evaluating weapons and weapons systems for the military for a number of years, coupled with his personal experience as a veteran of war. It was this acumen that set him apart from some writers who were merely journalists in the firearms industry, or as Charlie was fond of saying, those who “don’t know which end of the tube the bullet comes out of.”
After retiring from military service in 1996, Charlie had the time and interest to put forth into a second career as a full-time writer; however, in retirement, his affairs were well in order—he wrote for the pleasure it brought him—not out of necessity. It was this position that allowed him to take a no-nonsense approach to his subject, which garnered him a high degree of following and credibility among his readership.

Charlie took a serious fall by accident at his home in Florence, Alabama, on Friday, June 10, 2011. He suffered brain trauma and never regained consciousness. Air-lifted to the University of Huntsville Trauma Center, doctors determined that he was completely void of cognitive functioning, and did not expect him to survive the night. He clung to life only by aid of life support through Sunday, June 12, when his family made the difficult decision to remove him from life support. He died at 1615 hours. Arrangements had been made to donate his organs, as Charlie had desired. He was 69 years old.

While many knew Charlie as an authority on police and military weapons, he also wrote about combat handguns and replica guns of the American frontier. And, although some knew of his background as a soldier and a peace officer, there was another side to Charlie. He was a “sheepdog,” resolutely protecting the flock when need be, that’s for sure, but the man had a big heart, too. His family and friends knew his warmth and kindness, and that he would help anyone who came to him with humility. He was a staunch patriot, and a man of Christian faith. His wife, Diane, his children, and his grandchildren and friends have no doubt that he is now in a better place. He will be missed, and never forgotten.

You can find an archive of Charlie Cutshaw’s work by clicking here.