A man made headlines recently when he stopped a 250-pound black bear with his Uberti 1866 Yellowboy in .45 Long Colt in Colorado. The man fired eight shots in close quarters, finally dropping the intruding bear dead. 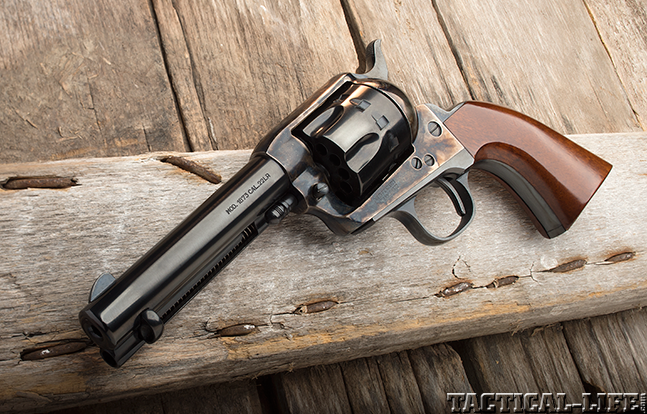 The intense standoff began the day before, when native Texas Bill Williams, saw a large bear outside. Williams and his wife Stephanie live in Conroe, Texas, and spend summers at the 400-square-foot cabin in Colorado.

“Ninety six percent of this county is national forest land,” said Williams. “In the 23 years we have had this cabin, we have never had any problems with animals. Although, we have seen signs of them passing through our property.”

The night before the incident, Williams saw the large bruin outside the cabin. It came close enough he put a plan into action.

“I saw him out the window and realized I didn’t have a loaded gun,” said Williams. “So I loaded up the Yellowboy and hung some hooks on the wall next to the bed to hold it. I left the bear alone that night. He was outside and I was inside.”

Williams, also a Cowboy Action shooter, knows how to handle the Yellowboy. The Uberti serves as a modern-day replica of the Old West lever-action rifle with the famous brass receiver. With the rifle loaded and ready, they left the bear alone, and it presumably left the area.

But the bear apparently had other plans. It cam back and smashed through a window at 3 AM, waking the couple.

“It sounded like an explosion when he slammed the window open,” said Williams. “I grabbed the Yellowboy and walked to the opening from the bedroom to the living room. We don’t have a door to separate the rooms. With the front porch light coming through the windows, I could see the bear on the couch, just 42 inches from me. I cranked off the first round and hit him. He jumped down from the couch and stood up in front of me about three feet away. I shot him twice more and he fell back to the other side of the room.”

Williams then put several more shots into the bear. He could it still moving. After reloading, Stephanie handed him a flashlight, and he put a final bullet into the bear, finally ending the fight.

“That rifle saved our lives,” said Stephanie. “I blow it a kiss goodnight every night before bed. It was one of the scariest things I have been through, but we are slowly getting back to normal.”

Williams dialed 911 following the incident. A sheriff’s deputy and wildlife officer assessed the shooting, ruling it self-defense. Since that fateful night, the couple has returned back to living as normal, for the most part. Bars now cover the windows. And the door has been reinforced.

But one thing remains unchanged. That ol’ Yellowboy still hangs by the bed, ready, and loaded for bear, if you will. For more information, visit uberti-usa.com.