There are a lot of bad people out there, my friends. Evil people, who want to blow up school buses, kidnap innocents and fly airliners into skyscrapers: 24-7 the world’s law enforcers are trying to uncover the identities of these evil people.

But luckily for us, the people who make Hollywood movies and television have figured it out. Turns out the real bad people in the world are…private military contractors!

That’s right! Hollywood has joined the New York Times and the U.S. Congress and jumped on the latest bandwagon (like they did with “assault weapons” and “Right-wing extremists”) to demonize a new phenomenon they don’t understand.

Remember in the early 1970s when the deranged Vietnam veteran was the “go to” bad guy in movies and on TV? The reason for that happening is due to straight ignorance. Few Hollywood screenwriters knew any former soldiers, (with the exception of a few men like John Apocalypse Now Milius) and so it was easy to think that all returning vets were disassociated powder kegs. That’s why the latest round of products headed for your multi-plex and government-mandated HD TV feature a new generation of Evil Doers. That’s right, those dastardly private military contractors with names that sound something like Blackwater. Early on in the Global War On Terror, Congress and many major studio execs already didn’t understand why anyone would want to go to Iraq for Love of Country—but this? Going to Iraq for Money? That had to indicate some dark, secret agenda.

The Dark Past Vs. Today
When I was watching TV and movies back in 1970s, soldiers for hire, or “mercenaries” were the heroes of films like the amazing Richard Burton/Richard Harris/Roger Moore African classic The Wild Geese, Clark Gable in Soldier of Fortune and Sam Peckinpah’s great The Killer Elite. Burt Lancaster even leads a team of hired adventurers to rescue a Rancher’s wife in the western The Professionals. These professional soldiers were always tough, capable heroes who brought back the skills they learned on the battlefield.

The irony is that private security contractors like Blackwater aren’t actual mercenaries—they are not soldiers and do not deploy on combat missions. They operate within the terms of their company’s guidelines, which in turn are specified in that company’s contract with the government. But an ill-advised round of Congressional Hearings looking for something else bad to pin on the Bush Administration’s handing of the Iraq War led to a firestorm of hysterical newspaper editorials and hastily written “exposé” books creating a new Boogeyman out of the mere words “Blackwater.”

TV’s refined ’80s problem-solver known as The Equalizer played by Edward Woodward was a retired mercenary. The most beloved A-Team led by George Peppard and Mister T risked their lives to help people who had no other place to turn for help. But in today’s TVs retread of the old TV series Knight Rider, the show’s bad guys are private contractors from a group called “Blackriver.” Private contractors have faced the fearsome lawyers of NBC’s Law & Order and William Shatner’s Boston Legal on ABC.

On CBS’ hit TV show The Unit, my buddy Scott Foley finds his counter-terrorist team confronted by the Evil Contractors of “Blackthorn.” David Caruso and his intrepid team of forensics investigators in CSI: Miami recently tracked down a former “Blackstorm” contractor who stole a KRISS V submachinegun and went on a killing spree. Blackriver. Blackthorn. Blackstorm. Time To Get Real.

Blackwater—the real Blackwater—designs weapons and trains people to use them. They are not hired killers. Even though almost all Blackwater operatives are retired police and military personnel, Hollywood has decided that these guys are somehow evil traitors—amateur mercenaries, untrained bar room buddies who picked up their AR-15s and decided to make money doing the dirty work for the stock company of Hollywood bad guys—evil corporations and corrupt Government Black-Bag squads.

Mark Wahlberg’s retired marksmen Bobby Lee Swagger is framed for an assassination in last year’s movie thriller Shooter, when he finds himself on the wrong end of private contractor’s guns. Comic actor John Cusack found himself playing a private contractor twice—in the romantic comedy Grosse Pointe Blank and in a Baghdad Green zone populated by “war profiteers” in the Black comedy War, Inc.

The private security contractors in the movie Rambo actually faired better than most. At first portrayed as callous mercenaries who don’t care about their assignment, when they see the atrocities of the Burmese soldiers, they quickly follow Sylvester Stallone’s Rambo to prove they can “Die for something.” By the end of the film I was actually rooting for the obnoxious ex-SAS hard-ass played by Graham McTavish and the heroic super sniping of Barrett-.50-toting “School Boy.” Both brought the suburban theater audience to its feet. Sadly, Rambo was a rarity. Expect to see evil, sub-gun-hauling Blackwater clones facing our movie and TV heroes for the next few years. They’re safe targets, without even researching enough to understand that private contractors are employed at the behest of the U.S. State Department—that they provide security and armed escort services, not combat. They train police in those nations in criminal justice practices. They burn drug fields and train emergency responders. They protect U.S. businessmen on foreign soil. They were waist deep in the muck of New Orleans after hurricane Katrina while local agencies and FEMA were trying to get their heads out of their asses. The services that private contractors provide allow the military to do the work of the military.

While the Congressmen and Movie Studios are busy trying to paint Blackwater as hired killers and war profiteers, they should remember March 2004: Iraqi insurgents killed four Blackwater contractors in Fallujah, Iraq. Their bodies were set afire and dragged through the streets before being hanged from a bridge over the Euphrates River. The incident was one of the factors leading to the first Battle of Fallujah. The next time you see the faceless, heartless bad guys of “Blackrain” or “Blackstone” chewing up the big or little screen, remember these “heartless mercenaries” risk their lives to protect U.S. government and private personnel working in the war zone, doing the jobs that free up our combat troops to protect the free world.

Bad
Transporter 2: This follow up to the fantastic actioner that made Jason Statham a star, features Kate Nauta as a lingerie-wearing hit woman who sports a pair of machine pistols to go with her garter belts. Even for a popcorn movie, this hit woman traipsing around Miami in her underwear took the threat out of the story.

Worse
Smoking Aces: This hit man and woman on the loose foul-up featured the most outrageous lady shooter: Tarija Henson shooting her Barrett M82 from one skyscraper to another—and killing anyone who gets in the way, friend or foe!

Good
Underworld: Kate Beckinsale shot her way into my heart as the two-gun, werewolf-hunting vampire in this film and its sequel Underworld Evolution. Two USPs again! Women seem to love that H&K!

Good
Resident Evil: Milla Jovovich surpasses Angelina as the current screen gun queen. Playing futuristic warriors in The Fifth Element, Ultraviolet, and a vengeful woman in .45 were just warm ups for the three movies based on the Capcom Video game Resident Evil. Playing genetically enhanced security operative Alice, Jovovich carries just about every conceivable weapon across the trio of films, seen most recently with a pair of Para Ordnance .45s in Resident Evil: Extinction.

WOMEN LOCKED & LOADED!
Any honest operator will tell you it’s easier to train a woman to be a good shooter than a man. Women don’t have the cultural baggage that men do from years of running around playing cops and robbers with pointed fingers, so they actually follow instructions.

That said, in the movies of recent years there’s been an explosion of flicks featuring gun-toting females, many of them Angelina Jolie. From Charlie’s Angels to Wanted, women are loaded for action! 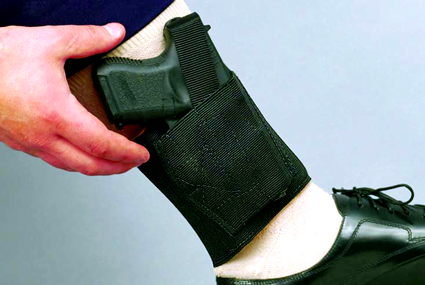 There are a lot of bad people out there, my friends. Evil people, who…