It goes without saying, but we’ll say it again anyway: cops put their lives on the line every day. Recently-released body cam footage capturing an intense shootout between an armed suspect and a pair of Cincinnati police officers only drives that point home even further. Watch it above. Be advised that it contains graphic content.

Here’s a bit of context for the clip: WCPO reports that at 12:13 a.m. on the morning of March 12, Officer Kenneth Grubbs and Officer William Keuper responded to a domestic violence call at an apartment building on Gilbert Avenue. They walked into the courtyard, where they encountered 37-year-old Damion McRae.

Grubbs attempted to stop McRae because he matched the description of the person involved in the domestic incident, but before he could, McRae pulled out a 9mm rifle — identified by Cincinnati.com as a Kel-Tec Sub 2000 carbine — and started firing.

Grubbs was shot in the lower abdomen and fell to the ground. Despite his injury, he managed to return fire. He can also be heard on the body camera footage telling McRae to put his hands up.

“He’s an 18-year veteran officer,” Cincinnati Police Chief Eliot Isaac said. “He’s very well trained, and here he proved his training. After being shot he was able to protect himself and his partner and communicate with the suspect.”

Keuper, who was walking behind Grubbs when he was hit, also returned fire.

Isaac confirmed that Grubbs fired 17 shots, while Keuper fired eight rounds during the gunfight. McRae, who only fired one round before his rifle jammed, was shot at least four or five times.

“I really think it was an act of God that saved those two cops,” Hamilton County Prosecutor Joe Deters said. “If that gun didn’t jam, we might be going to a couple of funerals now.”

Grubbs and McRae were both taken to University of Cincinnati Medical Center to be treated for their injuries. Grubbs is already back at home continuing his recovery.

McRae has a rap sheet going that stretches back two decades. Deters said his record shows a whopping 14 felony arrests and 26 misdemeanors, including multiple gun and drug-related busts.

“I can tell you this, that guy is going to jail for the rest of his life,” Deters said. 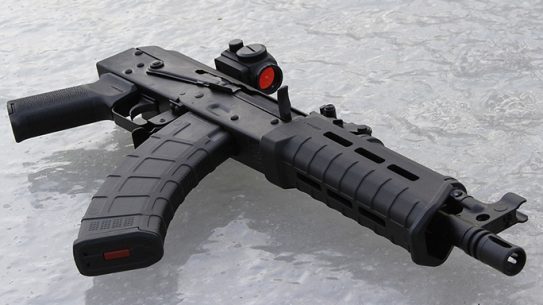 Century Arms has announced it is now shipping its C39v2 and RAS47 to distributors...