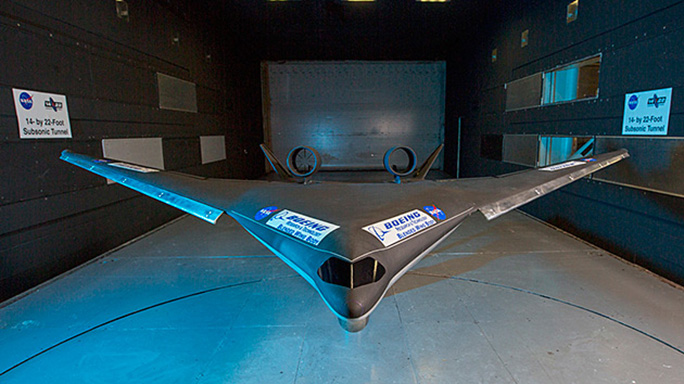 Boeing and NASA researchers are testing a 13-foot-wingspan, 6 percent scale Blended Wing Body (BWB) model at a subsonic wind tunnel at the NASA Langley Research Center in Virginia. Boeing is readying the BWB for the next step in maturing the concept– a manned demonstrator.
(Photo by NASA Langley photo by David C. Bowman)
Comment(s)

Boeing is back in the wind tunnel testing one of its most innovative and potentially game-changing advanced concepts: the Blended Wing Body.Testing is underway through the end of September at the NASA Langley Research Center 14- by 22-Foot Subsonic Tunnel in Virginia. Boeing and NASA researchers are using a 6 percent scale, 13-foot-wingspan Blended Wing Body (BWB) model to validate testing methodology, as well as map airflow over the airplane using lasers and smoke with a technique known as particle imagery velocimetry (PIV).

Time permitting, testing will be conducted to measure the effectiveness of various control surfaces. That data will be compared with and supplement the set of data collected over the last two years on the same model at NASA Langley and the much larger 40- by 80-foot subsonic tunnel at NASA Ames Research Center in California.

“Testing the same model in two very different tunnels gives us data to make our test methods better,” said Dan Vicroy, principal investigator at NASA Langley. “Plus these tests will let us do PIV – something we didn’t do before.”

“Our tests are a continuation of more than two decades of successful research and development of this concept, which is unparalleled in industry,” said John Bonet, Boeing’s test director for the BWB. “What we learn from this round of testing will be used to complete the definition of our aerodynamic, stability and control low-speed databases – a major milestone in the technology development of the concept.”

The BWB concept is unique in that it forgoes the conventional tube and wing shape of today’s airplanes, in favor of a triangular tailless aircraft that effectively merges the vehicle’s wing and body.

It may not be just a concept for too much longer, according to company leaders.

Boeing sees potential for a BWB-type aircraft to be developed in the next 10 years as a subsonic transport, possibly beginning with military transport variants for airlift and aerial refueling, said John Dorris III, Mobility senior manager, Phantom Works Fixed Wing Assembly for Boeing.

“By transferring technology and features from current Boeing programs –like the C-17 and KC-46 – we’re able to address the U.S. Air Force’s vision for 2030 and beyond,” he said. “Boeing’s Blended Wing Body concept can be scaled, with variants that will allow us to meet our customer’s mission requirements and fleet demands.”

Backed by decades of successful structural, wind tunnel and flight testing of two different X-48 aircraft configurations, Boeing is readying the BWB for the next step in maturing this technology: a manned demonstrator.

NASA’s Aeronautics budget proposes the return of X-planes. Boeing has completed an extensive study of BWB X-plane options for NASA and is supportive of NASA’s desire to create a series of manned demonstrators as part of its mission to advance the science of aviation for public benefit, said Naveed Hussain, vice president, Aeromechanics Technology, at Boeing.

“We believe our body of work, both in design, test and engineering, is technically superior when compared to other designs in the marketplace,” Hussain said. “The BWB is showing great potential to offer structural, aerodynamic and operating efficiencies as well as the capability to be more fuel efficient and quieter over more traditional aircraft designs.”

Much of the current testing is a collaboration with NASA Aeronautics and is a follow-on to tests that NASA and Boeing completed in 2014 and 2015 under NASA’s Environmentally Responsible Aviation program. The goal of that program was to develop technologies that improve fuel efficiencies, lower noise levels and reduce emissions. With the exception of Boeing proprietary technology, NASA knowledge gained from this NASA/Boeing collaborative research will be documented and publicly available to benefit the aviation industry. The BWB remains one of many promising concepts for a future NASA X-plane.

NASA’s funding for the BWB project was provided as part of programs that are available for others to apply and compete for. In addition, Boeing has provided an approximate equal share of the costs for these efforts.

The above is a release from Boeing — for more on the Blended Wing Body, please visit Boeing.com. 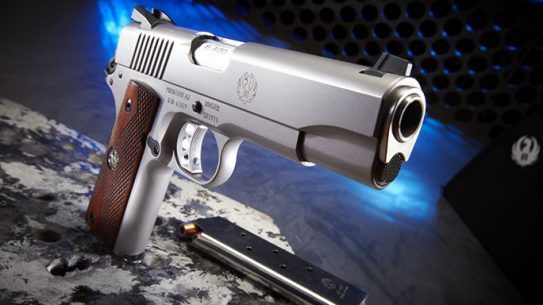