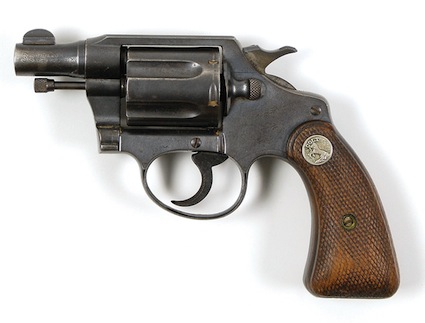 The .38-caliber revolver taped to Bonnie Parker’s inner thigh when she and Clyde Barrow were killed by a Texas posse in 1934 has been made federally compliant and will be auctioned later this week.

The Colt .38-caliber Detective’s Special revolver, which was recovered from Parker’s body by Texas Ranger Capt. Frank Hamer, had its serial numbers obliterated in the heyday of Bonnie and Clyde’s reign of terror, prompting Bureau of Alcohol, Tobacco, Firearms and Explosives (ATF) officials to issue a new number to make the handgun legal.

RR Auction in New Hampshire received the gun this summer from a private collector and noticed that the revolver had been altered, according to ATF officials from its field office in Manchester, N.H. The Gun Control Act of 1968 requires firearm manufacturers to place serial numbers on firearms and made firearms with removed, obliterated or altered serial numbers illegal to possess.

The Manchester, New Hampshire Field Office of the Bureau of Alcohol, Tobacco, Firearms and Explosives (ATF) has made the infamous Bonnie and Clyde “squat” gun, strapped to Bonnie Parker’s thigh after she and Clyde Barrow were ambushed and killed by law enforcement officers in 1934, federally compliant. The “squat” gun, which was recovered from Parker’s body by Texas Ranger Captain Frank Hamer, had the serial numbers removed. ATF issued an ATF supplied serial number to the Colt .38 caliber Detective’s Special revolver.

The Amherst, New Hampshire auction house RR Auction received the gun in the summer of 2012 from a private collector and noticed that the revolver’s serial numbers had been obliterated and immediately contacted ATF for assistance. Special Agents from the ATF Manchester Office examined the revolver and contacted the ATF Firearms Technology Branch, ATF’s technical authority for firearms and their determination under federal laws. The Firearms Technology Branch was able to determine that the Parker revolver was originally manufactured with serial numbers, thereby making the revolver non-complaint under federal law.

The Gun Control Act of 1968 requires firearm manufacturers to place serial numbers on firearms and made firearms with removed, obliterated or altered serial numbers illegal to possess.

ATF Special Agents were able to obtain an ATF-issued serial number for RR Auction, which then stamped the serial number onto the revolver’s receiver making the firearm federally compliant. The auction is scheduled for Sept. 30. RR Auction will donate the proceeds from a Sept. 28 open house to the National Law Enforcement Officers Memorial Fund.

“ATF understands the importance of this historically significant firearm. We are pleased we were able to work in partnership with RR Auction to make the gun legally compliant.” said Guy N. Thomas, Special Agent in Charge, ATF Boston Field Division