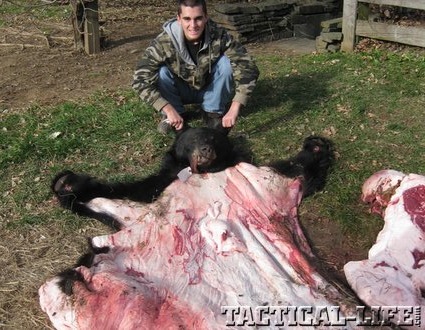 Getting your bear home can be a chore. If you are were hunting solo, visit the local sports store to enlist volunteers. Then talk to your taxidermist and skin your bear including the head and paws as soon as possible to avoid slippage.

Most New York big-game hunters go a lifetime without catching so much as a glimpse of a black bear in the wild. But last season 17 year-old Tony Ugarte of Poughkeepsie, New York not only saw a black bear in his very first year hunting, but on his very first morning afield. And to top that off he kept his composure long enough to take it down with one clean shot with his brand new rifle. Here is how it went down.

Tony had tagged along with his father the year before, just to see what hunting was all about. That’s all it took to get him hooked. The next summer, his dad bought him and his older brother Nick brand new stainless steel Savage Axis bolt-action .30-06 rifles complete with camouflaged stocks and Bushnell 3×9 Trophy XLT scopes. Excited about the upcoming deer season, they took their new rifles to a nearby shooting range and practiced regularly at 100 yards until they were proficient. Opening day could not come fast enough!

On The Hunt
The alarm clock blasted at 5 a.m., and brothers Tony and Nick and their father Juan were up, dressed and out the door in a 30 minutes. They were hunting Greene County in the Catskill mountain range near the town of Lexington, NY. Juan told his sons that bears were known to be in the area, and should they see one to shoot it where they would a big buck—in the heart-lung region right behind the shoulder. Little did Tony know at the time, but that piece of advice would pay off handsomely for him in just a few hours. As the sun rose, the trio set off up the mountain, splitting up when they reached a steep rock-strewn ridge around 7:30. Nick slid off to hunt alone while Tony and his father settled down on the ridge 15 or 20 yards apart. 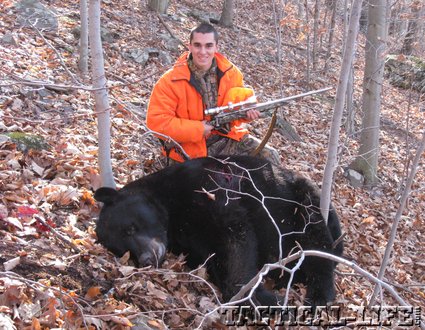 “I sat down on a rock with my new rifle on my lap, and waited patiently,” said Tony. “I occasionally glassed the terrain below me with my new binoculars, but nothing was stirring. As time passed I ate one of my sandwiches, and kept tabs on my father who sat motionless nearby. About 9:00 I caught some movement to my right out of my peripheral vision. It was a bear! He was only 15 or 20 yards away, and he was slowly walking right at me!

“I tried to signal my father without any luck. He had his back to me and was looking off to his left. I did not want to spook the bear, but I had my rifle pointed right at him nonetheless. I also did not want to take a head-on shot, so I waited—not sure what would happen next. The bear slowly turned and started walking downhill weaving back and forth and sniffing all around then came out from behind a tree only 12 yards away giving me a broadside shot. Dad still had his back to me, so I shouldered my Savage and looked through the scope. All I could see was fur!” 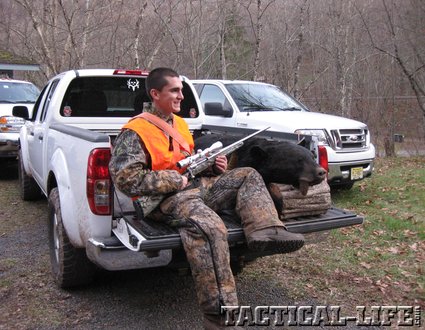 Now, even a seasoned hunter could have come unglued at this point and blown the opportunity, but Tony held it together and calmly cranked the scope down to 3X.

“I aimed behind the bear’s near shoulder and touched off a Remington 150-grain Core Lokt Express,” Tony recalled. “I quickly bolted in a second round as the bear tumbled down the hill until it got caught up in a tree. As the bear roared I could see blood on its shoulder. I knew I hit him right where I was supposed to!

“I looked over and saw that my dad had his sights on the bear. Neither one of us moved for 15 minutes as the bear took its last breaths. Then my dad came over and gave me a big hug. As we talked about what had just happened, we radioed for Nick to join us. Then we snapped off a few pictures. We were all smiling, not believing our good fortune.”

“The fun was over when it came time to drag the bear back to camp,” added Tony. “The three of us could not budge the bear, even after Dad and I field dressed it! Chris Magnani and his friend Justin Frolich, who were hunting out of a nearby camp, offered to help us get the bear out of the woods. We tied a rope around its neck and all five of us grabbed onto it. The bear moved all of 3 inches! 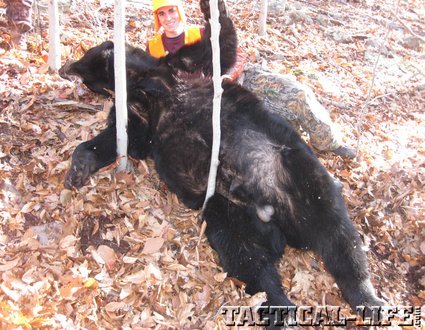 “As we all again pulled on the rope, it broke, and Justin fell to the ground breaking two bones in his hand. He went back to his camp and then drove himself to the hospital,” Tony said with sadness. “Six hours later we got the bear to our camp with the help of a tarp we borrowed from Justin’s camp. I called the DEC and reported the kill. An officer soon arrived and checked my tag. We estimated the live weight of the bear to be 600 pounds. No wonder we had trouble dragging it back to camp!

“We spent the night at our camp reliving the experience over and over again, and then rented a moving trailer the next morning to take the bear home. We put a tape on the hide and it measured 7 feet 6 inches from the tip of his nose to the heel of its back paw. The skull green scored 27 inches, but we will have to wait for the mandatory drying period to get it officially tallied. Our taxidermist assured me it would easily qualify for the Boone & Crockett Club and score high in the New York record book.”

What a way to begin a hunting career! 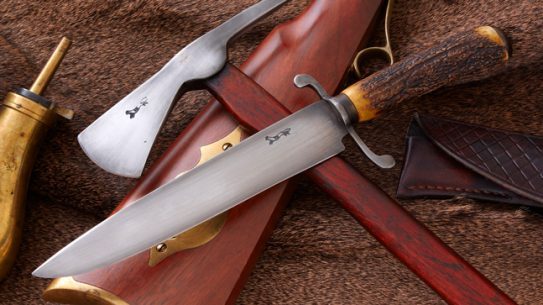 With Swamp Fox Frontier Steel knives, what is old is new again and proving...