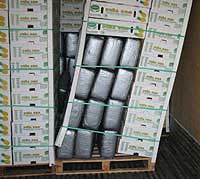 The first seizure occurred at the Falfurrias Border Patrol traffic checkpoint on March 6, when agents observed a tractor-trailer enter the primary inspection area. While the primary agent performed an immigration check on the driver, a CBP Border Patrol canine alerted to the back of the trailer area. During a search inside the trailer, agents located 357 bundles of marijuana weighing 3,584 pounds concealed inside air ducts. The value of the marijuana is $2,867.200.

The second seizure occurred on March 6, when agents assigned to the Brownsville Border Patrol Station responded to suspicious activity along the Rio Grande River. Agents arrived in the area and saw several individuals loading a dump truck with bundles of marijuana. As the truck tried to leave the area, agents stopped it. The bed of the truck held eighteen bundles of marijuana weighing 1,525 pounds and valued at $1,220,280.

The third seizure occurred at the Falfurrias Border Patrol traffic checkpoint on March 8. While the primary agent performed an immigration check on the driver of a semi-truck, a CBP Border Patrol canine alerted to the trailer. A search revealed 119 bundles of marijuana concealed within a load of pineapples. The bundles of marijuana weighed 2,134 pounds valued at more than $1,707,000.

The drivers, vehicles, and contraband were all turned over to the Drug Enforcement Administration.