An off-duty Brazilian cop unloaded on a pair of armed robbers while simultaneously holding his baby with one arm, a wild moment that was captured on CCTV. Watch the footage above.

British publication The Independent says the Brazilian cop, Sgt. Rafael Souza of the 49th Metropolitan Battalion, was with his and infant son at a pharmacy in Campo Limpo Paulista, São Paulo when two hooded men bounded in while wielding guns.

One suspect, 24-year-old Jefferson Alves, pointed his firearm at Souza, who identified himself as a police officer before drawing his firearm and—while clutching his son—opening fire.

The security tape shows Souza shoot at Alves. Souza then disappears from the frame while his wife hides in an aisle. He then reappears, hands the child to his wife, and runs off again. The video cuts out there, but that’s when, according to local news station Radio Acesa, Salves discharged his weapon at the second suspect, 22-year-old Italo Creato.

Both suspects were pronounced dead at the scene by paramedics shortly thereafter.

Police are examining all firearms found at the scene and going through the CCTV footage. Souza told investigators he opened fire because he feared for his and his family’s safety after he identified himself to the suspects as a police officer. 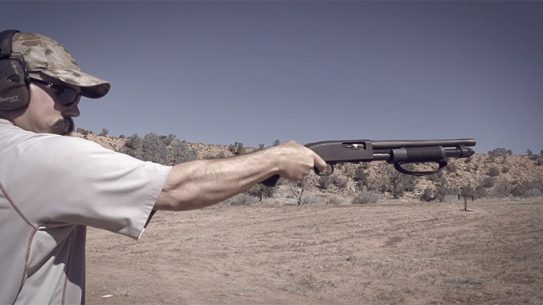 Nearly doubling our capacity, we hit the range with the Aguila Minishells and let...