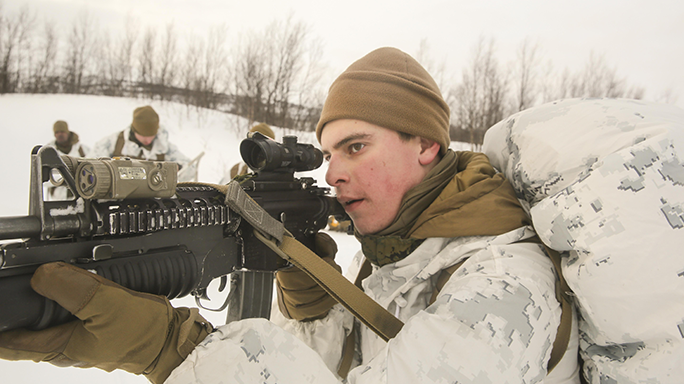 Lance Cpl. Evan George, a mortarman with Black Sea Rotational Force, sights in while conducting a routine patrol providing security for his squad during the final exercise of cold-weather training aboard Porsangmoen, Norway, Feb. 16-20, 2016. Arctic training was conducted by U.K. Royal Marine Commando Mountain Leaders and hosted by the Norwegian military to improve the U.S. Marine Corps’ capability to support their NATO Allies in extreme environments.
(Photo by Cpl. Immanuel Johnson)
Comment(s)

The following is a release from Cpl. Immanuel Johnson, Marine Corps Forces Europe:

The arctic training was conducted by U.K. Royal Marine Commando Mountain Leaders and hosted by the Norwegian military to improve the U.S. Marine Corps’ capability to support their NATO Allies in extreme environments.

“The last three weeks we have been focusing on survival, mobility and the ability to operate and fight in an austere environment,” said Capt. Jonathan Blankenship, a company commander with BSRF. “The survival portion challenged the Marines because that transcends every operative environment.”

The Marines and sailors operate without their allied mountain guides during this last portion of the training to apply the cold-weather survival and mobility techniques they learned the past three weeks.

“It was my first time working with the U.K. Royal [Marine] Commandos in a foreign country,” said Cpl. Thomas Powers, a fire team leader with BSRF. “They helped us from the beginning, from getting our snowshoes on to operating on skis with our weapons.”

The culmination of the training tested the Marines’ ability to operate with minimal supervision from the U.K. Royal Marine Commandos during the four-day event, pushing everyone to their limits.

“I have worked with the [U.K. Royal Marine] Commandos on past deployments and in the United States; this has been a productive experience with the skill set and experience they bring in this environment specifically,” said Blankenship. “The junior guys have a different perspective on not just being Marine and maintaining that level of professionalism, but also how to patrol in an environment like this from a subject matter expert spending one-on-one time with the Marines; it was a huge benefit to them.”

Being able to patrol on skis or snowshoes while operating with weapons efficiently was the final portion of cold-weather training.

“The U.K. Royal [Marine] Commandos are knowledgeable about this environment; it has been an honor to be taught by them,” said Powers. “Giving us the capability to grasp their techniques on cold-weather training and incorporate infantry tactics strengthens [our allies] and the entire Marine Corps.”

Marines and sailors with BSRF will use the cold-weather training they have received from the U.K. Royal Marine Commandos in the upcoming Exercise Cold Response 16, a joint NATO and allied country exercise composed of 12 countries and approximately 16,000 troops.

“Everything we do is about teamwork on this deployment, not just from the platoons all the way to the battalion, but working with every host nation we go to train with or alongside,” said Blankenship. “Whether it’s in an arduous environment like this or being on the open plains in eastern Europe fighting on terrain together, it’s all about the teamwork.

“Strength through partnership, but it’s not just the partnership; it’s the teamwork aspect that’s going to make everything work.” 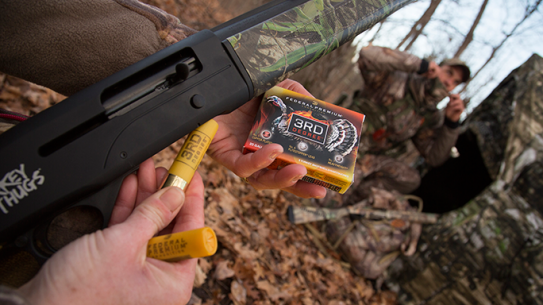 The all new 3rd Degree 20 Gauge turkey shotshells from Federal Premium use a...