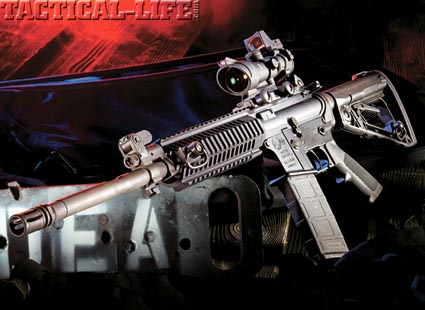 Fontana Unified School District police purchased 14 of the Colt LE6940 rifles last fall, and they were delivered the first week of December — a week before the Connecticut school shooting. Over the holiday break, the district’s 14 school police officers received 40 hours of training on the rifles. Officers check them out for each shift from a fireproof safe in the police force’s main office.

Fontana isn’t the first district to try this. Other Southern California districts also have rifle programs — some that have been in operation for several years. Fontana school police Chief Billy Green said he used money from fingerprinting fees to purchase the guns for $14,000 after identifying a “critical vulnerability” in his force’s ability to protect students. The officers, who already wear sidearms, wouldn’t be able to stop a shooter like the one in Connecticut, he said Wednesday.

“They’re not walking around telling kids, ‘Hurry up and get to class’ with a gun around their neck,” the chief said. “Parents need to know that if there was a shooter on their child’s campus that was equipped with body armor or a rifle, we would be limited in our ability to stop that threat to their children.”