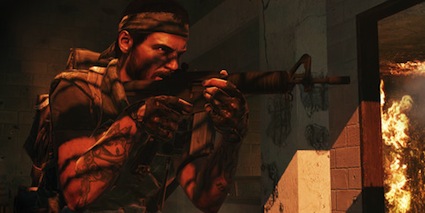 Players will now unlock guns, grenades, equipment, attachments, killstreaks, and everything else through in-game currency, which is earned through playing the game. You will still level-up through experience points, which may unlock the privilege of purchasing some new guns, but everything will be purchased. This means that players can unlock the weapons they want without having to grind through guns that they’ll never use.

There are two ways to earn more currency, dubbed “CoD Points” or “CP” for short: Wager Matches and Contracts. Wager matches consist of four free-for-all gametypes that are different than the standard CoD gameplay. Only the top three players will win money and everyone has to ante-up to compete. They are:

One in the Chamber – Everyone starts with a pistol and a single bullet. Each kill earns an additional bullet. One-hit kills only. Waste your bullet(s) and you’re left with your trusty knife.

Gun Game – The first to get a kill with all 20 weapons wins the game. Everyone starts with the same gun and a kill instantly switches you to the next gun in line. Melee kills will drop the killed player back a gun. The guns go, roughly, from pistols, to shotguns, to submachine guns, to assault rifles, to machine guns, to sniper rifles, to explosive weapons, and finishes off with the crossbow and then ballistics knife.

Sharpshooter – Everyone has the same gun, always. Guns switch automatically every :45 seconds to something random. The final gun nets double points.

Players will now unlock guns, grenades, equipment, attachments, killstreaks, and everything else through in-game…