Canadian police Thursday arrested the driver of a car laden with five fuel canisters, a chain-saw and a home-made crossbow close to the Toronto center where G20 leaders will meet.

The grey-haired, bespectacled driver was hustled away by police after they stopped his car because it was topped with a large homemade steel container, a police spokesman said.

The metal storage box was riveted together and balanced on some foam on the roof of a silver Hyundai as it cruised past the downtown Novotel hotel, less then half a mile (under a kilometer) from the convention center where world leaders are gathering this week for the G20 summit.

“The design of the vehicle gave us some concern,” constable Hugh Smith told reporters, as a firefighters’ hazardous material crew and a bomb disposal squad arrived to secure the car.

Smith confirmed a man, in his mid-50s, had been arrested, but could not confirm his identity, and said no charges have yet been brought. “This is an ongoing investigation,” he said, adding the car was “filled with weapons of opportunity.”

It was the second such arrest in two days, after police on Wednesday arrested a man and a woman in a home close to Toronto, and charged them with possession of explosives.

Some 20,000 police have been deployed across Toronto and further north into the lakeside community of Huntsville for the summits of G8 and G20 leaders which begin Friday.

A swath of downtown Toronto has been ringed with steel barricades, schools and businesses have been closed, and one level of the main Union Station has been shut, leaving only local trains able to ferry passengers.

“I’m really glad we found this,” said one policeman to AFP as his colleagues leafed through the Hyundai’s contents, which were emptied onto the roadside and surrounded by police cyclists, as a small crowd of onlookers gathered.

Inside the car they found five blue and red fuel canisters, some only partially full, a half-empty soft drink bottle, a bundle of arrows with red and yellow tips, as well as a large chainsaw, the homemade orange steel crossbow and a baseball bat. 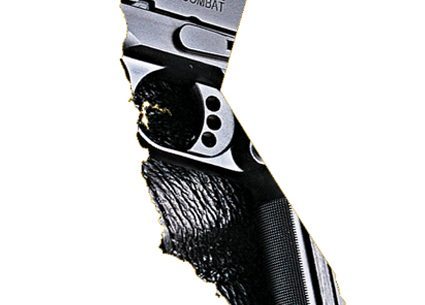