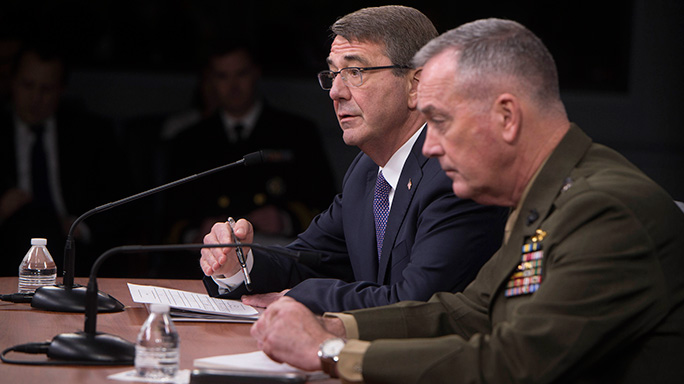 Defense Secretary Ash Carter and Marine Corps Gen. Joe Dunford, chairman of the Joint Chiefs of Staff, answer questions about efforts against the Islamic State of Iraq and the Levant during a news conference at the Pentagon, March 25, 2016.
(Photo by Navy Petty Officer 1st Class Tim D. Godbee)
Comment(s)

The following is a release from Cheryl Pellerin, DoD News:

“He was a well-known terrorist within ISIL’s ranks, dating back to its earliest iteration as al-Qaida in Iraq when he worked under [the group’s leader Abu Musab al-] Zarqawi as its liaison for operations with Pakistan,” the secretary said.

“The removal of this ISIL leader will hamper the organization’s ability … to conduct operations both inside and outside of Iraq and Syria,” he said.

When the fight against the Islamic State accelerated a few months ago, the secretary said, the coalition began with storage sites where ISIL holds its cash, and now the leader who oversees all funding for ISIL operations is dead, hurting the terrorist army’s ability to pay fighters and hire recruits.

“Our campaign plan is first and foremost to collapse ISIL’s parent tumor in Iraq and Syria, focusing on its power centers in Raqqa and Mosul,” he added.

In Syria, coalition-supported local forces recently took the town of Shaddadi, repelled ISIL’s counterattacks and ultimately severed the main artery between Syria and northern Iraq, making it harder for ISIL’s leaders and forces to travel between Raqqa and Mosul, Carter said.

Iraqi forces have moved from their staging base at Makhmur and are advancing to new positions as part of the early stages of operations to collapse the Islamic State’s control over Mosul, the defense secretary added.

U.S. Marines near Makhmur now are providing artillery fire there at Iraq’s request, he said, to help protect and support the Iraqi advance against ISIL.

“In both Syria and Iraq we’re seeing important steps to shape what will become crucial battles in the months to come,” Carter said.

As local partners move forward, the coalition continues to bring relentless pressure on ISIL commanders in Mosul, the secretary added.

Along with killing Imam, U.S. forces targeted Abu Sara, a top Islamic State leader charged with paying fighters in northern Iraq, and several ISIL associates who were directly involved in external plotting and training, he said.

“These precise actions came after recent strikes that destroyed a significant quantity of improvised explosive devices and bomb-making equipment that could have been used against our partners headed for Mosul,” Carter added, noting that the actions are believed to be successful and damaging to the Islamic State.

The defense secretary said the momentum of the campaign against ISIL is clearly on the coalition’s side.

“The United States military will continue to work intensively with our coalition partners to build on this progress, as our counterparts throughout our governments work to defend our homelands at the same time,” he said.

Carter also announced that yesterday he and his Saudi counterpart, Deputy Crown Prince and Defense Minister Mohammad bin Salman, agreed to convene a U.S.-Gulf Cooperation defense ministerial on April 20 in Riyadh ahead of President Barack Obama’s participation in the U.S.-Gulf Cooperation Council leaders’ summit there the next day.

“This will be an important forum to build on our counter-ISIL defense ministerial in Brussels last month,” Carter said.

The meeting also will strengthen U.S.-GCC defense partnerships by allowing participants to review and discuss the way ahead for joint regional defense initiatives that all committed to during the 2015 US-GCC Camp David Summit last May, the secretary added. 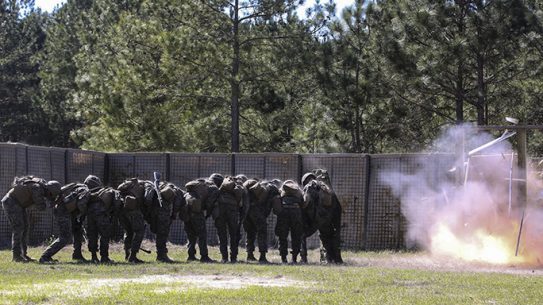