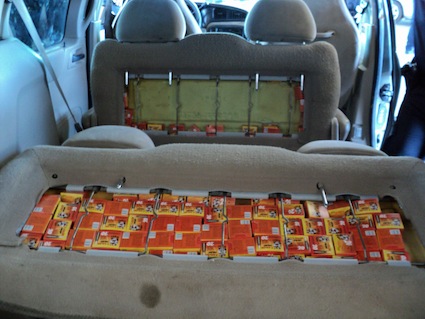 On Oct. 1, at approximately 11 a.m., CBP officers were screening travelers in the outbound lane that directs traffic from the U.S. into Mexico. The CBP officers became suspicious of a 1999 Ford Windstar occupied by two men. The driver was a 19-year-old man identified as a U.S. citizen and resident of Douglas, Arizona and the passenger was a 19-year-old man identified as a Mexican national and resident of Agua Prieta, Sonora, Mexico.

The CBP officers searched the vehicle discovered that the two men were attempting to smuggle 11,800 rounds of 30 caliber ammunition and 43 high capacity magazines designed for assault rifles, in the quarter panels, seats, doors and heater core.

CBP officers seized the ammunition and magazines. The two men were turned over to the custody of Immigration and Customs Enforcement for further investigation and prosecution.

A criminal complaint is simply the method by which a person is charged with criminal activity and raises no inference of guilt. An individual is presumed innocent until competent evidence is presented to a jury that establishes guilt beyond a reasonable doubt.