Chinese police and military units could soon be fielding the ZKZM-500, a special rifle equipped with a laser capable of seriously burning human skin from half a mile away.

Developed at the Xian Institute of Optics and Precision Mechanics at the Chinese Academy of Sciences in Shaanxi province, the ZKZM-500 is a 15mm weapon that weighs in at around 6.6 pounds, or about the same as an AK-47, according to the South China Morning Post. It can be mounted on cars, boats and planes.

In addition, the weapon is powered by a rechargeable lithium battery pack. It’s also capable of firing over 1,000 “shots,” with each lasting a maximum of two seconds. Furthermore, the laser produces no sound when it is fired. Therefore, “nobody will know where the attack came from. It will look like an accident,” an anonymous researcher told the Post.

“The pain will be beyond endurance,” another researcher said.

The UN Protocol on Blinding Laser Weapons, signs by over 100 nations, prohibits the use of weapons that can cause permanent blindness. Because of this, the ZKZM-500 is a “non-lethal” weapon. The laser can’t kill a person with a single shot, but if he or she is hit with it enough times, it would start to burn a hole in their body.

“The weapon is designed to do things such as setting fire to illegal banners at a protest or setting fire to the hair or clothing of a protester,” said the general manager of ZKZM Laser, the tech company that built the prototype. “It is not designed explicitly for killing like a gun that uses bullets and cannot cause the ‘instant carbonisation’ of human skin and tissues.”

Another researcher said the weapon would “burn through clothes in a split second … If the fabric is flammable, the whole person will be set on fire.”

A Chinese government document cited by the Post says protest leaders would lose “the rhythms of their speech and powers of persuasion” as a result of getting hit with the ZKZM-500.

In addition to non-lethal protest applications, the ZKZM-500 is also suited for covert military operations and hostage situations, the Post claims.

The ZKZM-500 is allegedly ready to be mass produced. The first unit to receive them will be anti-terror squads in the People’s Armed Police in China.

While this all sounds intriguing, some are skeptical of the story.

“There’s just no way that a laser powered by a lithium-ion battery that a person could carry would be capable of producing the kind of heat described at point blank range, let alone at 800 meters,” TechCrunch‘s Devin Coldewey said. “That’s because of attenuation. Lasers, unlike bullets, scatter as they progress, making them weaker and weaker. Attenuation is non-trivial at anything beyond, say, a few dozen meters. By the time you get out to 800, the air and water the beam has traveled through enough to reduce it a fraction of its original power.”

“I’m not saying there will never be laser weapons. But I do feel confident in saying that this prototype, ostensibly ready for mass production and deployment among China’s anti-terrorist forces, is bunk,” Coldewey added. “As much as I enjoy the idea of laser rifles, the idea of one that weighs a handful of pounds and fires hundreds of instantly skin-searing shots is just plain infeasible today.”

In response to the skepticism, the South China Morning Post put up a video from ZKZM Laser allegedly showing the ZKZM-500 hitting targets on a rooftop. Check it out above. 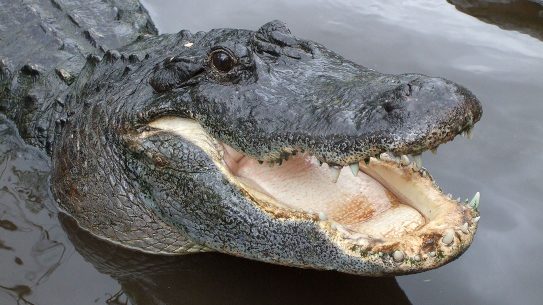 A Florida deputy took out an alligator with a Bushmaster AR-15 rifle after the...