Documents released publicly by the Central Intelligence Agency on Aug. 8 detail the capsule’s incredible recovery, using what was at the time the Navy’s most sophisticated deep-sea submersible.

On July 10, 1971, a classified U.S. satellite, code-named Hexagon, attempted to return a mysterious “data package” to Earth by ejecting a capsule over the Pacific Ocean. The capsule’s parachute failed, and the canister slammed into the water with an excruciating 2,600 Gs of force.

Hexagon satellites, which were declassified in 2011, were photoreconnaissance spacecraft that were part of an American Cold War-era spy program. Since these satellites preceded today’s era of digital technology, Hexagons recorded images on film, sending them back to Earth in capsules that re-entered Earth’s atmosphere and landed within a designated zone near the Hawaiian Islands in the Pacific Ocean.

During the first Hexagon mission in the summer of 1971, a parachute carrying one of these capsules broke, and the precious cargo crashed into the ocean and sunk about 16,400 feet (almost 5,000 meters). 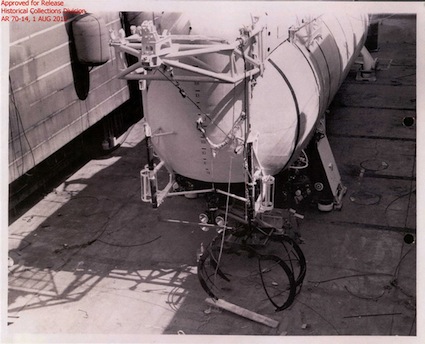 Read the rest of Denise Chow’s report for SPACE.com via Yahoo!.