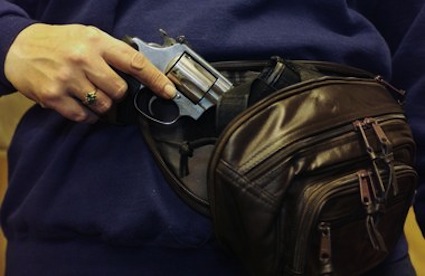 Cleveland has about a half dozen firearm provisions that are stricter than the state law. For example, no one can openly carry a gun and assault rifles and shotguns are banned — all of which run contrary to Ohio’s uniform gun law. Plain Dealer file

The Ohio Supreme Court heard arguments in a case pitting the city against the state. The city is fighting to govern its residents with its own set of rules rather than those imposed by an Ohio statute.

Ohio’s constitution allows cities to exercise “home rule” to enforce policing ordinances as long as those local rules do not infringe on state “general” laws, which are considered the unquestioned rule of the land.

“One thing the state fails to recognize is that one size does not fit all,” Cleveland assistant law director Gary Singletary told the justices. “The city is trying to protect its citizens through reasonable regulation.”

Cuyahoga County Common Pleas Court has already sided with the state, saying the Supreme Court has already established a precedent in a 2008 ruling blocking the city of Clyde from prohibiting concealed carrying of firearms in its city parks because it violated the state’s general law.

The Ohio 8th District Court of Appeals overturned the lower court, saying the state gun law was not a general law, according to a four-pronged test the Supreme Court established in a 2002 Canton case.

Georgia clamps down on illegal immigrants in colleges.