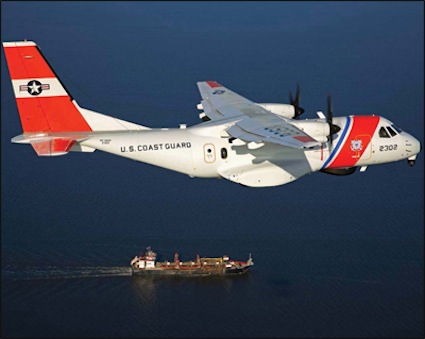 The Coast Guard’s HC-144A Maritime Patrol Aircraft flies over a ship. An option was exercised on April 4 to buy the 16th and 17th aircraft for the fleet. U.S. Coast Guard photo.

The Coast Guard has already taken delivery of 13 Ocean Sentries, with the 14th due by July. The Coast Guard exercised the first option on the contract for the 15th Ocean Sentry in August 2011 with delivery expected in the summer of 2013.

Even before the Coast Guard formally accepted the first Mission Systems Pallet, which provides enhanced sensors and communications equipment, for the Ocean Sentries in March 2008, the HC-144 was already proving its value and capability. The airplane conducted its first search and rescue mission in February 2008, when the aircraft and crew oversaw search efforts following the collision of two U.S. Air Force F-15C fighter jets over the Gulf of Mexico. Although still undergoing integration and operational testing at the time, the Ocean Sentry’s mission system collected Automatic Identification System data, which in turn helped identify and communicate with civilian vessels in the area of the crash, including a good Samaritan vessel that was vectored to help locate the downed airmen.

The Ocean Sentry’s 10-hour, long-range capability, its ability to fly at lower speeds than its HU-25 Falcon jet predecessor and its passenger capacity proved key as the plane was selected by the 8th Coast Guard District commander to respond to flooding in the Midwest in the summer of 2008. The Ocean Sentry conducted flights over flooded areas, helping Coast Guard leaders determine where to deploy rescue and recovery resources and to provide the maritime industry information about the flood’s impact on the maritime transportation system.

The Ocean Sentry’s sensor array and C4ISR (command, control, communications, computers, intelligence, surveillance and reconnaissance) capabilities provided real-time situational awareness of conditions in Haiti following the 7.0 magnitude earthquake that devastated the island-nation in January 2010. The Ocean Sentry’s Mission System Pallet, a roll-on, roll-off suite of electronic equipment, allows for superior collection, interpretation and dissemination of data from the aircraft’s multiple sensors, and the ability to transmit and receive classified and unclassified information from other aircraft, surface vessels or shore facilities. The Ocean Sentry is also equipped with an Electro-Optical/Infra-Red system and a multi-mode search radar. About 90 percent similar to the Mission System Pallets found on the Coast Guard’s HC-130Hercules airplanes, the Ocean Sentry’s Mission System Pallet allows for common training and operation. 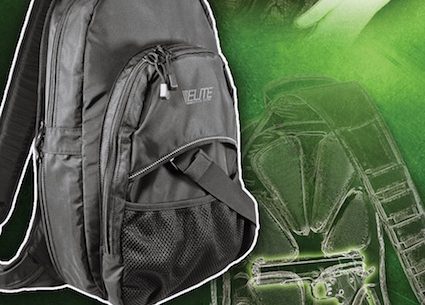 The Coast Guard’s HC-144A Maritime Patrol Aircraft flies over a ship. An option was…