Police officers are forced to make split-second decisions that can mean the difference between life and death. Don’t believe us? Watch the body cam footage of a Colorado police officer shooting an armed suspect above.

Douglas County Sheriff’s Deputy Brad Proulx—a six-year veteran of the department—was driving near the intersection of County Line Road and Sante Fe Drive in Littleton, Colo. when he spotted a white SUV parked by the side of the road. Proulx pulled up behind the vehicle and, as per standard procedure, switched on his body cam.

The footage shows Proulx walking over to the passenger side of the car. He then backs up and starts walking around to the driver’s side.

As Proulx turns the corner, the SUV driver suddenly opens his door and swings at Proulx with a rifle.

Proulx backs up and falls to the ground, but he quickly pulls out his service weapon and fired two rounds, hitting the suspect once in the arm. He then radios “shots fired, shots fired” and tells the suspect to “get on the ground.”

Eventually, backup arrived and arrested 25-year old Deyon Marcus Rivas-Maestas. He was treated for his gunshot wound at an area hospital and has since been charged with first-degree assault. His rifle was unloaded

“I just think this is a tremendously good video to illustrate how, in the blink of an eye, an incident can change,” Stephens said. “Here you have a deputy who is responding to… someone who needs help on the side of the road. That’s the mindset of law enforcement… within seconds, as you can see in the video, the deputy is fighting for his life.” 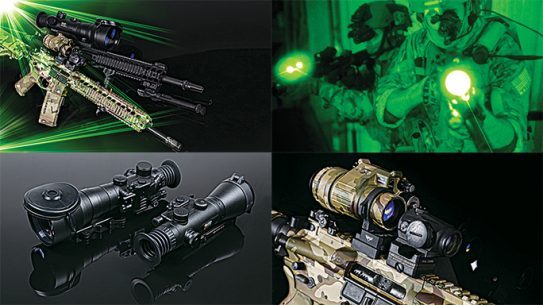 From scopes to clip-on night vision devices (CNVDs), there are a lot of things...