Colorado Police officers told a knife-wielding suspect to drop his weapon more than 40 times. He didn’t listen. Instead, he charged at one of the officers and was fatally shot. The intense incident was caught on two separate body cameras. Watch the footage above.

The Coloradoan says the incident began on the evening of July 2, 2017, when Susan Holmes called 911 and said her 19-year-old son Jeremy was armed with a “big knife” and on his way to his brother and sister-in-law’s home at Aggie Village Apartments on the Colorado State University (CSU) campus in Fort Collins, where he intended to kill them.

“He’s got mental health issues that have been growing for the last few months just dramatically … There’s no reason for him to be doing this,” Holmes said during the call. She added that Jeremy had been the subject of a mental health evaluation by police just weeks before, and that she had been trying to help him with his issues, but nothing was working.

“He just said, ‘you’re going to lose either two sons today or one,'” she told the dispatcher. “I’m just so horrified.”

CSU police were alerted to the situation by the dispatcher and sent to the Aggie Village Apartments. Around 25 minutes after the initial call, Officer Phil Morris spotted Jeremy walking and carrying an 11.25-inch knife he had purchased at a pawn shop four days earlier.

The video above starts off with Morris exiting his vehicle with his service weapon drawn and ordering Jeremy to drop the knife.

Holmes refuses to comply. He instead moves toward Morris while saying things like, “Kill me now,” and, “My life is over.”

“I don’t want to hurt you. Please drop the knife,” Morris can be heard saying repeatedly. He also told Holmes he had “tons of options” instead of the one he was currently choosing.

As Holmes continues to advance on Morris—who keeps backing up—Fort Collins Police Services officer Erin Mast can be seen in the video driving in the opposite direction. She was responding to a burglary call, but when she observed the situation unfolding between Holmes and Morris, she turned around, got out of her vehicle and ordered Holmes to drop the knife.

As the video reaches its climax, Morris tells Mast he’s going to use his Taser to take down Holmes. While he reaches for the device, Holmes charges at Morris, prompting both Morris and Mast to open fire. Holmes was shot six times—twice by Mast and four times by Morris—falling to the ground at Morris’ feet.

After a review of the shooting, Larimer County District Attorney Cliff Riedel has cleared both officers of any wrongdoing.

“Jeremy Holmes committed the only criminal offense during this incident,” Riedel wrote in a letter announcing his decision. “Had he survived, sufficient evidence exists to have charged Holmes with three counts of Attempted First Degree Murder and two felony counts of menacing with a deadly weapon.”

Riedel added that Morris “showed amazing restraint in not utilizing lawful deadly force earlier in the confrontation with Jeremy Holmes,” noting that the officer had put himself in greater danger by backing away from the cover of his patrol vehicle was Holmes advanced on him.

Fort Collins Police Interim Chief Terry Jones agreed with Riedel’s assessment, praising Morris for his efforts to de-escalate and Mast for her actions. He said an armed suspect within 21 feet is considered lethal, “but if you notice in Officer Mast’s video just how close Mr. Holmes got to (Morris), it was surprising the threat stopped as fast as it did.” Holmes was 11 feet from Morris when he charged.

Jones said that while he sympathized with Holmes’ family, “Mr. Holmes made that choice to charge the officer and the officers had to protect themselves.”

“It was his actions that resulted in the actions taken by law enforcement,” Jones added. 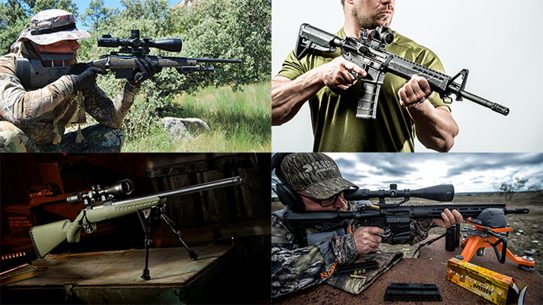 Turning a dream into a reality, we've assembled a list of affordable rifles that...