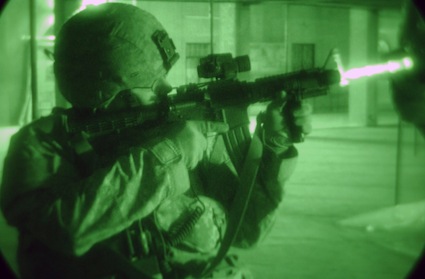 For nearly a decade, Colt Defense went without a lobbyist. The legendary gun maker based in West Hartford, Conn., had an exclusive deal to provide combat rifles to the U.S. military and didn’t need a hired gun looking out for the company’s interests in Washington.

Times have changed. After buying more than 700,000 Colt M4 carbines, the Defense Department has started a search for the rifle’s successor, giving Colt’s competitors the long-awaited chance to break the company’s grip on the market. So Colt turned to Roger Smith, a former deputy assistant Navy secretary-turned-lobbyist, to be the company’s voice in D.C. His fee is $120,000 a year.

The move highlights the importance of a contest that is the Super Bowl and World Series rolled into one for the small arms industry. The Pentagon may buy hundreds of thousands of the new carbine, which should be more accurate, lethal and reliable than the M4 used by troops in Afghanistan and Iraq. At stake is millions of dollars in business for the winner at a time when budgets are tightening and opportunities for long-term weapons contracts are dwindling.

There are major side benefits to being the primary rifle supplier. The American military’s seal of approval paves the way for gun sales to U.S. allies. Colt has sold 100,000 M4s overseas, and millions of its M16s — a rifle first fielded during the Vietnam War — are used by armies and law enforcement agencies around the world.

Remington Arms and other gun makers already had lobbyists in place long before the Army announced it wanted a better combat rifle. Remington has spent nearly $500,000 on lobbyists over the last two years alone in a push to get more of its weapons into the hands of U.S. troops, according to lobbying records filed with Congress.

Remington, with its headquarters in Madison, N.C., and a manufacturing plant in upstate New York, is represented by the firms Winborn Solutions and Nelson Mullins Riley and Scarborough. Remington will offer its multicaliber Adaptive Combat Rifle.

“The biggest thing that Remington wants is the ability to compete for contracts,” said Jason Schauble, vice president of Remington’s military products division.