Columbus police in Ohio released a body cam video showing an officer involved shooting that took place in the city’s Franklinton neighborhood of Columbus on July 7. Watch the footage above and below. Warning: it contains graphic language.

According to WCMH, it all began when a woman saw three kids throwing rocks at cars outside her house. She went outside to confront them, at which point they took off. The woman then went next door to tell her sister what happened.

While that was going on, the woman’s boyfriend—later identified as 30-year-old Kareem Ali Nadir Jones—left the home to look for the kids.

The Columbus Division of Police says Officers Samuel James and Marc Johnson were patrolling the area when they observed Jones walking between cars and behaving erratically. After a quick conversation while still in the vehicle, the situation escalated when they spotted a gun in his waistband.

The video, which doesn’t have any audio for the first minute because the camera microphone wasn’t switched on, shows the officers driving, stopping and exiting the vehicle with guns drawn.

Jones is then seen backing away with his hands up. Police said he wouldn’t comply with the officers’ orders to get down on the ground.

At this point in the video, Jones continues backing away. Upon reaching a parked car, he turns around to run and is clearly seen reaching for a gun in his waistband.

That’s when the officers opened fire and shot Jones.

The officer then switches the body camera mic on and can be heard yelling “Dude, why did you do that? Why?” as he and his partner turn Jones over and handcuff him.

Police recovered a 9mm Glock handgun at the scene which had been reported stolen in Vandalia, Ohio.

Jones was transported to an area hospital, where he died last Monday from his wounds.

“They did it by the book,” Jason Pappas, president of the Fraternal Order of Police, the local police union, said of the officer involved shooting. “It’s clear as day on this video that this suspect reaches back and is retrieving that firearm from his waistband at the time that he is shot.”

Columbus Mayor Andrew Ginther said “The body worn camera video released today is a graphic reminder of the dangers police officers face every day, and illustrates the split-second decisions officers must make to keep Columbus neighborhoods safe. Any loss of life is tragic. We feel for the friends and family left behind, and for the officers who will forever be impacted. Body worn cameras, however, can help provide early answers to difficult questions, and aid the thorough investigation that follows. They are an important tool that will help protect officers, the public and the public’s trust.”

But Jones’ sister, Marica Phipps, said the lack of audio at the beginning of the video has left her family with more questions than answers.

Phipps added that if the officers had tazed Jones, he’d still be alive today.

Pappas counters that the officers had no choice but to shoot Jones, who was on probation and shouldn’t have had a gun at all.

“We do not train less than lethal force in a lethal situation,” Pappas said.

“We roll up, we’re talking to him, and we see a bulge in his waistband under his shirt and we say, ‘That’s gotta be a phone.’ And as we let him walk towards this girl, we go, ‘Is that a gun or a phone?’ I’m recording all this by the way,” Officer James says in the second body cam video below. “Anyway, he draws down on him, he pulls his f*cking gun on us.” 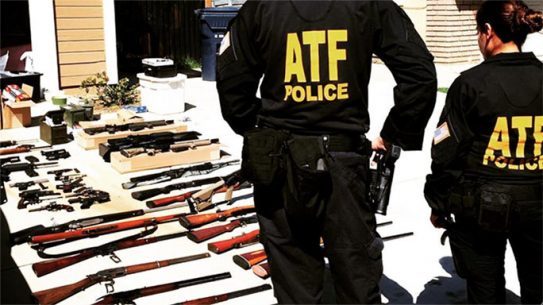 ATF: Which Gun Regulations Should Be ‘Repealed, Replaced or Modified’?