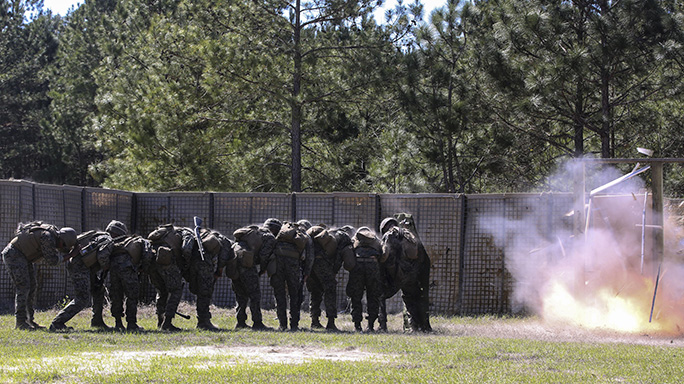 Marines with 2nd Combat Engineer Battalion breach a door during the assault breaching portion of the battalion’s sapper squad competition at Marine Corps Base Camp Lejeune, North Carolina, March 22, 2016. The competition was organized to determine the most proficient squads in the battalion while simultaneously challenging squads in the execution of combat engineer-based tasks.
(Photo by Cpl. Paul S. Martinez)
Comment(s)

Marines with 2nd Combat Engineer Battalion competed against one another in a series of training exercises to determine the best sapper squad across Marine Corps Base Camp Lejeune, N.C., March 21-25.

The event was organized as an internal competition meant to challenge individual squads in their proficiency at executing engineer-based tasks, while simultaneously determining those who will represent the battalion at a competition against other units. In the engineer community, sappers are Marines specially trained to breach enemy defenses utilizing various types of demolition, and are required to earn certification upon completion of a six-week-long course.

“This gives our Marines a chance to demonstrate their proficiency in an environment where they are being evaluated,” said 1st Lt. Ian Simpson, a platoon commander with the battalion. “It showcases their preparation, and how much work and effort they put into these tasks ahead of time.”

The events of the competition included an assault breaching exercise that challenged squads to safely and efficiently breach a door using explosives and the Mossberg 500 shotgun; sweeping a set path for improvised explosive devices and determining a response; engaging targets at distances up to 800 meters on a machine-gun range and building and breaching wire obstacles.

“It’s good training because it challenges all of us to think and come up with a plan together as one squad,” said Cpl. Ian M. Baird, a squad leader with the battalion. “Everyone is learning something out here across these ranges.”

Sappers are expected to be proficient with various breaching and construction equipment, and utilized detonation cord, C4, blasting caps, concertina wire, Bangalore torpedoes and compact metal detectors as needed to complete their mission.

Simpson emphasized the importance of having squads act independently in the execution of their tasks, and leaving them to think and direct themselves in the pursuit of a swift, efficient solution.

“I’m able to evaluate my Marines and determine what skills we may need work on,” Simpson said. “At the same time, it builds confidence in these squads because in a real-world environment they will have to work together to find the solution to an obstacle and employ it.”

Squads that come out on top of this competition are slated to compete against other battalion sapper squads in a large-scale competition this summer.

“We are looking forward to challenging the other units’ expertise,” Simpson said. 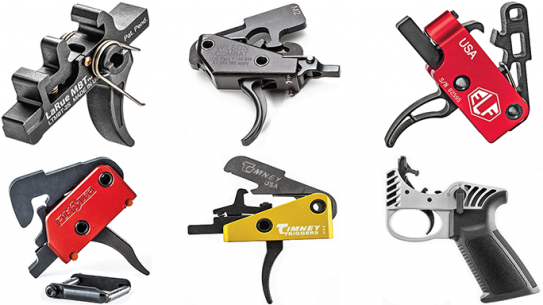 Dial in your AR’s precision with these easy-to-install aftermarket trigger kits!