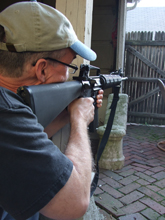 The fear on the street is palpable. Ever since the election of Barack Obama as President of these United States in November 2008, coupled with the election of a democrat party majority in both the U.S. House and Senate, concern for the United States and personal safety has ignited like a fire in dry grass. Sales of guns – black guns, rifles, shotguns and handguns (particularly 9mm) everywhere, have gone through the roof. AR15s have literally flown off of dealer shelves, and only now in the spring of 2009, have I seen the display samples of ARs begin to reappear on the wall of my favorite shooting emporium after the initial post election rush.

Manufacturers of ARs are still working to catch up and some of the major suppliers are as much as 150,000 guns behind. Not only that, ammo is in the shortest supply I have ever seen in the 43 years of my shooting life. Have you recently tried to get 5.56mm, 9mm or even .380 ammo?  Supplies of 5.56mm and 9mm ammo are in short supply due to the black gun buying craze; .380ACP because of the rise in people getting concealed carry permits and the resurgence of interest in convenient.380 handguns like the fine Ruger LCP. In fact, in doing a review of the Ruger LCP, my gun store only had a small supply of ONE .380 round on hand, the Winchesters 95-grain SXT, which they had just gotten in.

Unfortunately, I had to do a 30-round review of that pistol. There was none other to be found. The 5.56mm was the first caliber to noticeably be in short supply. This was first due to the war effort, the headlong adoption of 5.56mm rifles by law enforcement agencies ever since the great LAPD bank robbery and shootout, the general shooting public interest in and acceptance of the AR15 weapons system along with a realization that yes, the AR does have sporting purpose, and of course now, this new fear that is on the street. Sales of ARs also went up following 9/11.

What is odd about this new fear is that it is not coming from the average citizen gun owner out there, but it is coming from what to me is an almost shocking source: street cops. Street cops and SWAT cops that I know from various agencies – rural, suburban and metro – in my area are scared. Cops that before November 2008 never gave much thought (that I knew of anyway) to politics or more importantly to gun rights. For the most part, these are the guys that didn’t generally have any interest in shooting or gun ownership beyond keeping track of where their duty gun is, and a few of them didn’t even do that so well.

The guys I am talking about are some of the same guys who used to not even carry off duty on a regular basis- but not anymore. They don’t scare easily, defenders of the Constitution of this State and the United States (as our oath of office reads), have been buying ARs, survival gear, and all the ammo they can lay their hands on. All of them (or I should say “us”) have been discussing and have been acquiring guns to provide a layered perimeter defense.

We want something in  .308 (or in my case a superb M1 Garand in .30-06) for covering the outer perimeters, 5.56mm weapons for mid-range use (for some with more limited funds, the AK-47 and 7.62×39 cartridge will suffice), and for the close up stuff shotguns and handguns (love my Benelli M4 Tactical and Beretta 92 9mm).

What are we suddenly so afraid of? Well in our discussions it seems to boil down to four areas. First, fear of federal government intrusion into our lives. Every time I look at or listen to the news, there is something new and intrusive coming out of the Obama administration and this Congress. New tax schemes, government-run Canadian-style healthcare, a volunteer citizen defense force (whatever that is, what happened to the National Guard?) equipped with funding similar to our military, forced voluntary “service” after retirement, a lack of a southern border with hordes of illegal and criminal aliens pouring over our border, the swine flu scare as well as government forced closing of thousands of privately held Chrysler and GM dealerships, which will be the final nail in the coffin for these companies and the list goes on and on.

But these items in the news are just the tip of the iceberg. We can’t see the full impact of these actions yet, but we don’t know what was added into the thousand of pages of stimulus package bills in the dead of night yet. I predict however that when the plans contained in the stimulus packages go into effect, a lot of us are going to be surprised if not shocked by what has suddenly and sweepingly changed.

What also scares us is the second, well-founded fear that there is an assault weapons ban looming, one that would make the Clinton Ban appear like a look of disdain in comparison. I remember well the 1990s and the Clinton years: the rise of militia groups, the “black helicopter” rumors and paranoia, all of which was motivated by the Brady Law and the Assault Weapon’s ban. What if a new ban comes requiring registration or confiscation and turn-in of banned weapons as what happened in Australia?

I watched cops and citizens alike purchase these guns at $900 dollars and more, with custom or tricked out guns easily running into the $2,000 range. Then add on all the accessories, red dots, lights, slings and anything else you can name and you may have up to $3,000 wrapped up in your rig. I saw the looks in their eyes. These purchasers weren’t spending this kind of money just to turn in the guns for no compensation when a government tells them to. I foresee much civil disobedience coming down the road.

Americans are citizens, and not subjects like the British, Canadians or Australians. They just don’t always obey the law blindly and not one officer or citizen that I spoke to said anything like “I hope I get to keep this gun for awhile before they are banned; They are fun to shoot, so I would hate to give it up.” It isn’t going to happen, so the cop on the street and the soldier on the base needs to think now what he will do if the orders come down. I think you all get what I am saying here.

Which leads me to the third fear, that there is a revolution coming, yes, a revolution on the scale of the original American Revolution. You can hear this topic discussed on many of the talk radio shows by even the big name hosts. The possibility of an armed revolution against the U.S. government is being discussed, albeit very gingerly and fleetingly and as something to be avoided, which it is. I never heard this mentioned in the 90s.

One of my quietest, low profile officer friends brought it up the other day. He said that at some point in the near future, he felt there is going to be an armed revolt if things keep going the way they are. Something has got to give. I was shocked. Yes, I had heard this from some of my more radical cop friends in the past, but to hear it from a guy like this was unprecedented for me. Now, these guys are not saying this will happen to foment revolution, preach sedition or to even participate. They just want to be ready if it happens, to at least defend their families, because number four on the fear list is general societal chaos.

Cops fear for their parents, wives, children or grandchildren more now than ever before. Most cops are encouraging their spouses and loved ones to get concealed carry permits. Not only that, but some of these same cops are buying gun mounts for their personal cars so they can carry an AR in the family ride at the ready all the time. They are also strapping on heavier forms of off-duty hardware. I have other friends that are issued ARs or subguns for tactical team use, who always have their gear with them and are planning on just commandeering these weapons for personal use in defending hearth and home.

Final Notes
This is pretty heady and maybe even dangerous stuff. Know fully that I am not advocating anything here. I am reflecting to you what I see and hear going on around me, and maybe saying things that haven’t been said in the open, until now. It is something to think about.

Scott Wagner is a 30-year law enforcement veteran and trainer.

The fear on the street is palpable. Ever since the election of Barack Obama…