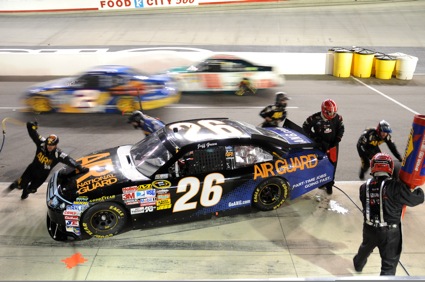 A member of Congress wants to end the military’s sponsorship of NASCAR race teams, saying it’s a waste of taxpayers’ money.

Rep. Betty McCollum, D-Minnesota, is offering an amendment to the 2011 House budget bill to ban the sponsorships, which her office said has cost the military $100 million over the past 10 years, according to the Minneapolis Star-Tribune.

“I would challenge the Pentagon to give me one example of someone today in Iraq or Afghanistan who saw the Go Army car going around the racetrack and that’s why they joined the Army,” Bill Harper, McCollum’s chief of staff, told HamptonRoads.com. “It may be the reason why they go to Home Depot but not necessarily Afghanistan.”

McCollum is in her sixth term and serves on the House Appropriations and Budget committees.

“NASCAR fans are the kind of people who fight America’s wars, which would put into question the wisdom of banning the military’s ability to reach out to them,” NASCAR spokesman Randy Poston said in the HamptonRoads report.

Jeff Green drives the Air National Guard's car No. 26, as he competes in…