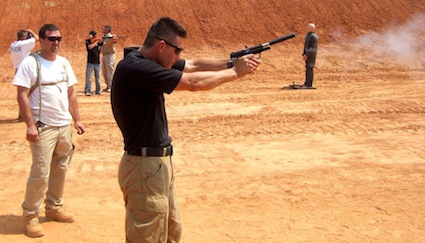 “We had outstanding turnout,” said Max Rodriguez, chief marketing officer for Thor. “We’re really pleased how many people came out to support this. We’re going to start planning now for next year.”

Vendors from far and near showcased their new wares, and allowed visitors to get their hands on all sorts of shooting-related products. Umarex, which has a new assembly and distribution facility in Fort Smith, displayed several of the new tactical rimfire guns, including a .22 long rifle version of the Colt 1911, which should be available sometime in November.

“We’ve got .22 versions of the Colt M4, the HK 416 and the MP SD with a mock suppressor,” said Umarex’s Cliff Eisenbarger. “We’re glad we got a chance to show the new stuff.”

Eisenbarger welcomed long lines of attendees waiting their turn to put a few rounds through the .22 rifles and pistols.

ALS Technologies, located in Bull Shoals, Ark, thrilled the crowd with loud booms and bangs, and large clouds of smoke and sparks. They demonstrated various less lethal 12 gauge rounds, flashbangs, and other munitions designed to help law enforcement take suspects into custody without killing them.

Former Australian SAS commando Jason Falla took a short break from the carbine course he was conducting on one of Thor’s adjacent ranges to make an appearance at the show. Falla served 12 years in Australia’s Special Operations Command before becoming a private firearms instructor.

“I like Arkansas,” said Falla. “It reminds me of country Australia. It seems like everyone knows each other. It’s more refreshing than a big city.”

Falla worked for Blackwater, and taught courses for special forces groups before forming his own private firearms training business called Red Back One. Even though he trains military personnel, he still sees plenty of civilian customers in the U.S.

Source and Photo: Roy Hill for The City Wire.

One Marine is making sure movie action looks real.