ARLINGTON, Va., Dec. 19 /PRNewswire-USNewswire/ — In commemoration of their 65th USO tour, the Dallas Cowboys Cheerleaders will again journey to Korea, the scene of their very first USO tour, to visit and bring in the
holidays with troops December 19-26. Having entertained service members for nearly three decades, the squad has participated in more tours than any other entertainment group in USO history. This tour marks their 28th holiday visit to those serving in the region. During the week-long USO/Armed Forces Entertainment tour, the troupe will celebrate its 65th tour with troops, meet with military personnel, sign autographs and perform their highly-anticipated musical variety show.

A highlight of the USO Celebrity Entertainment Program, the Cheerleaders have traditionally volunteered their time during the holiday season. Whether visiting with troops serving away from home, performing fully choreographed dance routines or hosting cheerleading clinics for military schoolchildren, the Dallas Cowboys Cheerleaders are synonymous with both football and the USO.

“The USO commends the Dallas Cowboys Cheerleaders for their unwavering commitment and support of our nation’s troops,” says President and CEO Edward Powell. “They, like our men and women of the U.S. armed forces, have gone above and beyond the call of duty. We look forward to many more years together and will be forever grateful.”

In 1979, the U.S. Department of Defense asked the Cheerleaders to travel to Korea and participate in a USO holiday tour. Touched by their experience and embraced by American troops, the troupe continued touring with the USO. Since then, they have assembled USO care packages, visited wounded service members, delivered holiday cards to troops and met a spectrum of military personnel. Most notably, the squad has entertained troops stationed all over the world, including Afghanistan, Albania, Kosovo, Germany, Belgium, England, Iceland, the United Arab Emirates, Bosnia, Italy, Hungary and Guantanamo Bay, Cuba, among many others.

“It’s hard to believe that this visit marks our 65th USO tour,” says Dallas Cowboys Cheerleader Megan Fox. “We don’t get caught up in the number of times we entertain our troops, we do it because we genuinely love visiting and performing for them. In fact, we are already looking forward to our next USO tour.” 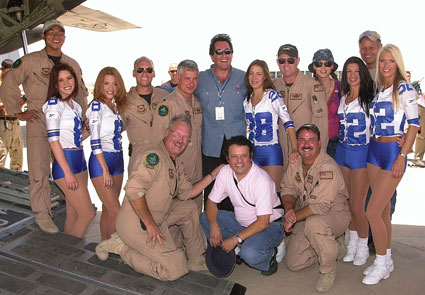 The Cheerleaders received the first-ever “Spirit of Hope” Award in 1997 in recognition of their patriotism and dedication to the U.S. armed forces. Created in honor of Bob Hope, the award remains one of the USO’s highest honors. Prior to this award, the troupe was also bestowed with the USO’s prestigious “50th Anniversary Award” for their commitment and help in boosting the morale of military personnel.

Most recognized for their trend-setting dance routines, the Dallas Cowboys Cheerleaders are regarded as “America’s Sweethearts.” Decked out in their trademark blue and white uniforms, the 38-member troupe has become the darling of the National Football League. Recognized worldwide, they have performed on “Saturday Night Live,” starred in commercials and motion pictures, and appeared on game shows like “Family Feud.” The troupe can now be seen on Country Music Television’s “Dallas Cowboys Cheerleaders: Making the Team,” a series revealing exclusive behind-the-scenes footage shot during try-out auditions and training camp.

For more than 66 years the USO has consistently delivered its special brand of entertainment and comfort to service men and women. As the bridge between the American people and their troops, the USO supports the nation’s Armed Forces by providing needed services, including entertainment, rest, education, supplies and connections to home. USO tours are an essential part of the USO’s mission of boosting troop morale. In 2006, the USO produced 66 tours and staged 328 special events, including troop performances, autograph signings, hospital visits and movie screenings. To learn more about the USO and how to support the troops, visit www.uso.org.

ARLINGTON, Va., Dec. 19 /PRNewswire-USNewswire/ -- In commemoration of their 65th USO tour, the…